The pictures of Ukraine President Volodymyr Zelenskyy used by the media website ABP Live and also by various social media users are not recent they are from the year 2021. 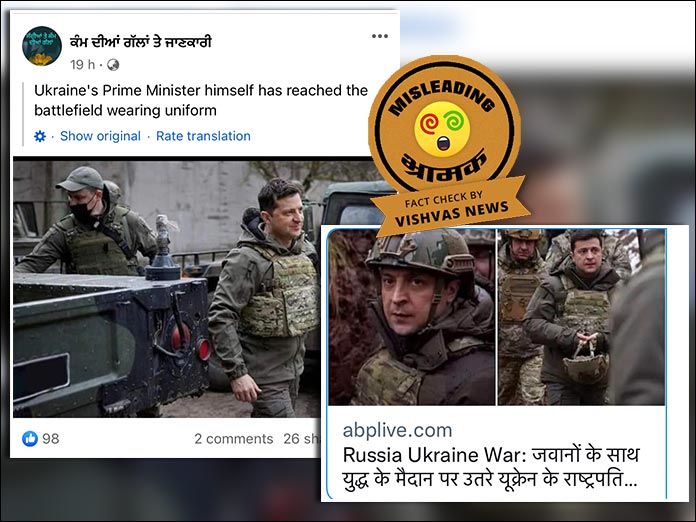 Vishvas News (New Delhi): In the ongoing Russia-Ukraine war which began on 24 February, 2022 Ukrainian forces battled Russian invaders on three sides on Thursday after Moscow mounted an assault by land, sea and air in the biggest attack on a European state since the second World War. However amidst the battle, misinformation around the same too is going viral.
In one such case, Vishvas News found an article being shared on https://www.abplive.com/ old pictures of Ukraine President, Volodymyr Zelenskyy which are going viral with recent claims.

Claim:
Vishvas News found several posts on social media, which consisted of pictures of Ukraine president in the military attire.

Twitter user Rajesh Chhetri too shared the pictures with claim: Brave person; Ukraine President Himself landed on the landmark of War. 💥💥 #UkraineRussia

Investigation:
Vishvas News conducted an investigation on the three pictures of Ukraine President used in the article one after the other carried on the website of ABP Live.

We found the first picture shared on the website of Financial Times, in an article titled, ‘Ukraine president fights oligarch on home front as Russia threat looms’ published on December 19, 2021.

Now, Vishvas News searched these images on the website of Getty Images with relevant keywords.

We ran another Google Reverse Image Search and found the second picture posted on China Daily on April 10, 2021.

Vishvas News followed similar steps for the third picture and found it on Getty Images.

We found the image four after doing a Google Reverse Image search in an article on Kyiv Post.

The caption in the image was: This handout picture taken and released by Ukrainian Presidential Press Service on April 8, 2021 shows Ukrainian President Volodymyr Zelensky on the frontline near Zolote, Luhansk region, eastern Ukraine.

All the four pictures used in the article are not recent and belong to 2021.

We also did a Google Reverse Image Search on the pictures being shared by social media users.

We found the viral image on Reuters article, titled, ‘Ukraine’s Zelenskiy to Putin: Meet me for peace talks in conflict zone’ The caption in the image said:
Ukraine’s President Volodymyr Zelenskiy visits positions of armed forces near the frontline with Russian-backed separatists in Donbass region, Ukraine April 9, 2021. Ukrainian Presidential Press Service/Handout via REUTERS

This indicated that all the images being circulated of Ukraine President in military uniform are from the year 2021.
Also Vishvas News did not find any news article supporting the claim that the Ukraine President was fighting war alongside the troops.

Vishvas News spoke to journalist in Ukraine Liz Cookman who confirmed that Ukraine President is not out on field alongside his troops at this very moment.

Conclusion: The pictures of Ukraine President Volodymyr Zelenskyy used by the media website ABP Live and also by various social media users are not recent they are from the year 2021.