RSS workers did not stab a Dalit IAS officer in Nagpur. Viral video belongs to the murder of a gambling den kingpin Balya Binekar. 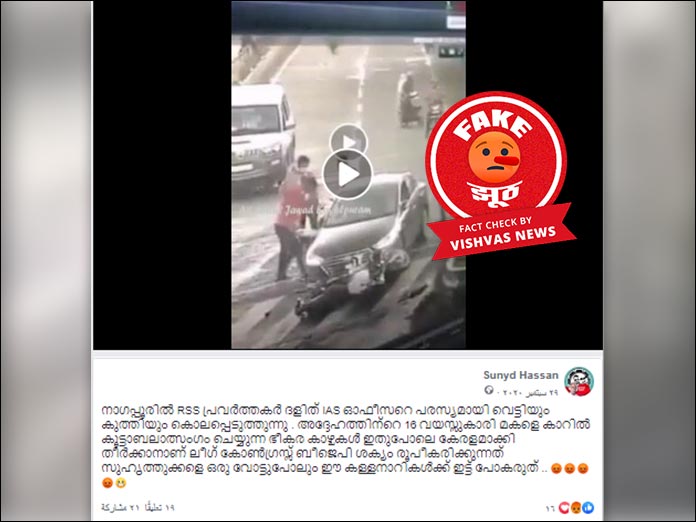 New Delhi (Vishvas News): Vishvas News recently came across a video clip which was a CCTV footage of a murder. This video clip is being widely shared on social media platforms, especially Facebook since September 2020. The video is being shared with claim, “RSS activists hack and stab a Dalit IAS officer to death.” It also further states that ‘his 16-year-old daughter was gang-raped in a car’.

Vishvas News in its investigation, found the claim to be fake. RSS workers did not stab a Dalit IAS officer.

Vishvas News used Google Translate on the content, the claim said: In Nagpur, RSS activists publicly hack and stab a Dalit IAS officer to death. The League Congress BJP is shaping up to make Kerala like the horrific scenes of his 16-year-old daughter being gang-raped in a car.

Vishvas News started its investigation with simple keyword search, since the video claimed that it was from Nagpur, we just checked if any murder was recorded on CCTV in Nagpur.

We also found a news on the city website, ‘The Live Nagpur’ uploaded on September 26, 2020, which said, “Gambling den owner Balya Binekar killed”. “In a chilling act of murder, tension prevailed in Nagpur today at Bhole Petrol Pump after 5 people killed a man in board daylight and fled away from the spot on their motorbikes,” the report said. This website too made use of the viral video.

Vishvas News then widened its keyword search. Using the keywords on Twitter, we found many updates on the murder in Nagpur.

In its last step of investigation, Vishvas News contacted, Nagpur bureau chief of ANI, Saurabh Joshi. He said, “The CCTV footage of a murder in Nagpur is from September when Kishor Binekar known as Balya Binekar, who was a gambling den kingpin was killed in broad day light. The place where he was murdered was almost a kilometre away from the Home Minister Anil Deshmukh’s residence. The main accused arrested in the case is son of the man Binekar had murder in 2001. Binekar was running a gambling activity and he had been booked in several crimes. There was no rape of a girl or the murder of an IAS officer in this case.”

Vishvas News then investigated the Facebook user who shared the video with false claims. User Sunyd Hassan is a resident of Kannur. The video he has shared has over a thousand views.

Conclusion: RSS workers did not stab a Dalit IAS officer in Nagpur. Viral video belongs to the murder of a gambling den kingpin Balya Binekar.