The nine-year old video of a man attacking Prashant Bhushan is now viral. The video is old and misleading. 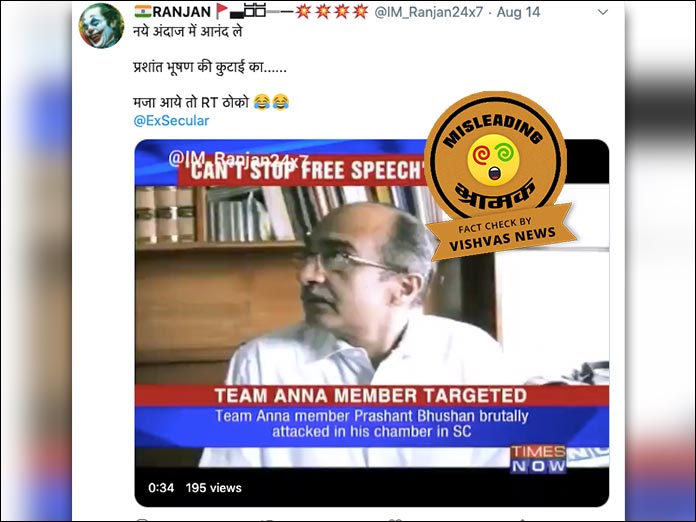 New Delhi (Vishvas News). As many rumours are spread on social about senior advocate Prashant Bhushan ahead of Supreme Court Contempt Case, we accessed a video wherein he was attacked. The video features a man attacking Bhushan.

Vishvas News investigation revealed that the video is of 2011 is now going viral. In 2011, few men who were angry with Prashant Bhushan, entered his office and assaulted him.

The Twitter handle Ranjan (@ IM_Ranjan24x7), while uploading an old clipping of a news channel, claimed: Watch people thrashing Prashant Bhushan…. if you liked this then RT!!
The  archived version of tweet can be seen.

Vishvas News observed the 48-second viral video wherein a man is attacking Bhushan. We also realized that the abuses were done using voice over separately.

In the next phase of the investigation, we uploaded the video to the InVID tool and using keyframes, we tried to find it through reverse image tool. We found the same footage in Times Now website. On 13 October 2011, the news uploaded on Times Now’s YouTube channel reported that a member of the Bhagat Singh Kranti Sena attacked Prashant Bhushan. Some people entered Prashant Bhushan’s office and attacked him. You can see the news here.

During a Google search we found a news on BBC Hindi . On the same date as the previous report, a news article stated that the police arrested two people for attacking Bhushan

The Twitter handle that shared the video was started in March 2015 and has more than eight thousand followers.

Conclusion: The nine-year old video of a man attacking Prashant Bhushan is now viral. The video is old and misleading.