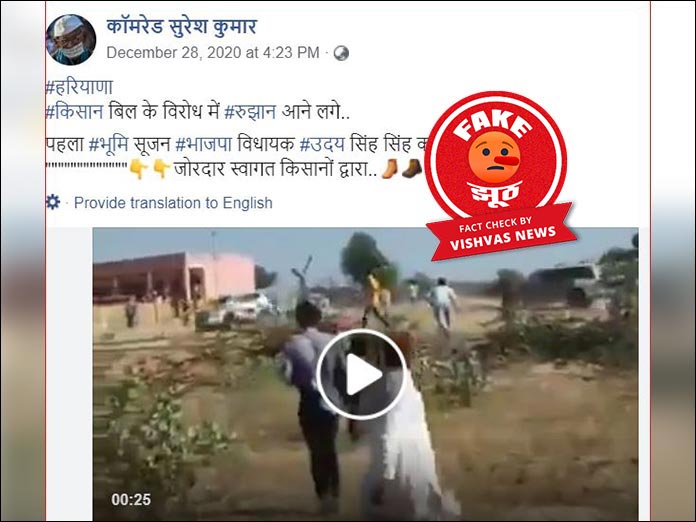 New Delhi (Vishvas News): A video is going viral amidst the farmers’ protest in Delhi borders. It is being claimed that BJP MLA Uday Singh was attacked by farmers in Haryana.

Vishvas News investigated and found that the video going viral is of an incident that happened during Rajasthan Panchayat elections and is falsely related to Farmers protest. The viral post is fake.

Vishvas News used the InVID tool to extract the screen grabs of the viral post. We used Google reverse image search to find the results on the web. During the search, we found a report on the Zee News website that had the same stills that were used in the video.

As per the news report dated November 27, 2020, two groups clashed at the time of voting in Sediya Gram Panchayat of Sarnau Panchayat Samiti in the Jalore district of Rajasthan. The report can be read here.

We further searched the e-paper of Daily Bhaskar published from Rajasthan. We found a report in the Jalore version of the paper dated November 28, 2020. As per the report, the clash between the two groups took place during the panchayat elections. The incident occurred during the polling in Sediya Gram Panchayat of the Sarnau Panchayat Samiti area. The clash took place between the Congressmen and independent candidates.

We further investigated by contacting Rajendra Singh, a senior Pali journalist. He said that the viral video is of Jalore. Here two groups clashed in the panchayat elections.

We scanned the profile of the Facebook user who shared the viral post and found that the user is based out of Siwan, Bihar.

Conclusion: Vishvas News investigated and found that the video going viral is of an incident that happened during Rajasthan Panchayat elections and is falsely related to Farmers agitation. The viral post is fake.