This claim turned out to be false in the investigation of Vishvas News. The person seen in the video is not Nepal’s MP, but Jagat Singh Negi, Congress MLA from Himachal Pradesh. 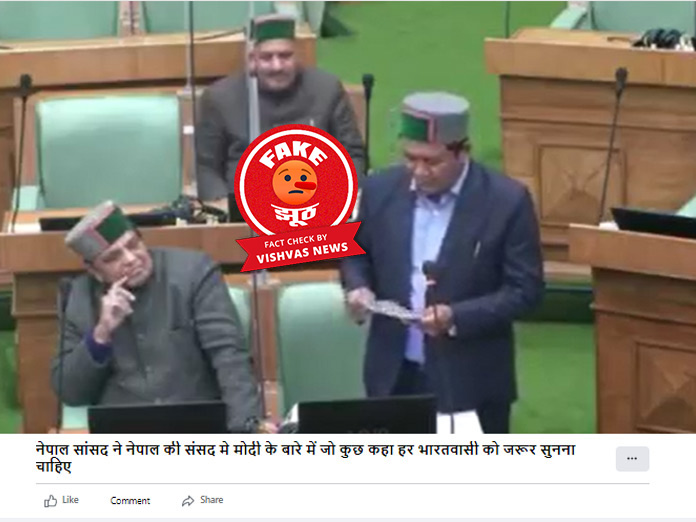 Vishvas News investigation revealed that the person seen in this video is not the MP of Nepal, but Jagat Singh Negi, Congress MLA from Kinnaur in Himachal Pradesh. The video is being shared with a false claim.

Facebook user “Maan Punjab Da” shared the video on August 21. The post read, “Every Indian must listen to what Nepal MP said about Modi in Nepal’s Parliament. ,

The archive link for this post can be found here.

To start the investigation, we searched about this video with related keywords. We found the viral video shared on the verified Facebook page of Himachal Congress on 21 March 2021. The caption accompanying the video read, “Listen from Congress MLA from Kinnaur Jagat Singh Negi about the great and successful Prime Minister of the country.”

YouTube channel “Apple News” also uploaded this video . According to the information given in the video uploaded on 23 March 2021, this video is from Himachal Pradesh and the name of the leader seen in the video is Jagat Singh Negi. In this video of 17 minutes 45 seconds, part of the viral video can be heard between 3 minutes 33 seconds to 7 minutes 39 seconds.

News related to the viral video was found on many other news websites also. The video has gone viral on social media several times in the past with the same claim. Vishvas News fact checks can be read here.

Vishvas News contacted Rajesh Sharma, in charge of Dainik Jagran Digital, Himachal Pradesh, to investigation this claim. He told us that this is Congress MLA from Kinnaur assembly constituency, Jagat Singh Negi. The viral claim is false.

At the end of the investigation, we did a social scanning of the page that shared this video with the wrong claim. Scanning revealed that 141 people follow the page. This page on Facebook was created on 25, April 2022.

Conclusion: This claim turned out to be false in the investigation of Vishvas News. The person seen in the video is not Nepal’s MP, but Jagat Singh Negi, Congress MLA from Himachal Pradesh.