Fact Check: Video of man throwing stone at a bus is old and is from Surat, no relation with CAA protests 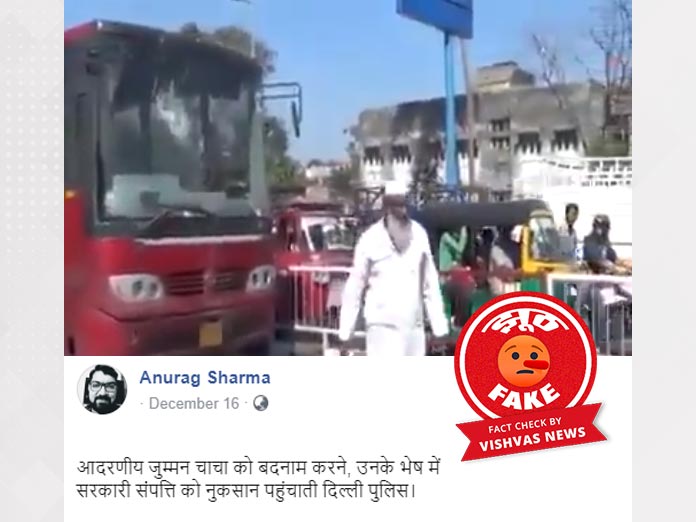 New Delhi Vishvas Team. Social media is full of rumours about Citizenship Amendment Act. Many anti-social elements are sharing unrelated photos and videos on social media to add to the chaos. A video is going viral in which a man wearing a skull cap can be seen throwing stone at a bus. The post claims that this video is recent and linked to the CAA protests. We found in our investigation that this claim is false. This video is actually from Surat in Gujarat and is from 2017. This video has nothing to do with the CAA protests.

In this viral video, a man wearing a skull cap can be seen throwing stone at a bus. Many claims are being made with this video. Taking a dig, somewhere it is being written that “Delhi Police is maligning the esteemed Juman uncle, damaging government property in his disguise”. Another claim is “Juman Chacha giving his invaluable contribution to the progress of the country!”

To investigate this post, we first extract the key frames of this video using Invid tool. Then we searched these key frames on Google reverse image. We found a video uploaded on YouTube channel named News4india India on Jan 28, 2017, detailing the incident. According to the video’s description the incident is from Surat in Gujarat when a bus had hit a passer-by. In protest, people threw stones at the bus.

We also found this news on Divya Bhaskar. This news was also published on January 28, 2017. According to the news, the incident is from Surat in Gujarat, when a bus had hit a passerby. In protest, people threw stones at the bus.

We spoke to Ajit Singh the PRO of Additional CP- Traffic and Crime, Surat for confirmation. He confirmed to us that this incident happened in Surat in 2017.

Many people are sharing this video on social media. One of them is a Facebook profile named Anurag Sharma. According to this profile, the user hails from Gurugram in Haryana and has 1,106 followers on Facebook.

Conclusion: We found in our investigation that this claim is false. This video is actually from Surat in Gujarat and is from 2017. This video has nothing to do with the CAA protests.