Fact Check: Video of Memorandum Being Submitted To Rajnath Singh In 2018 Viral In The Name Of Farmers Bill 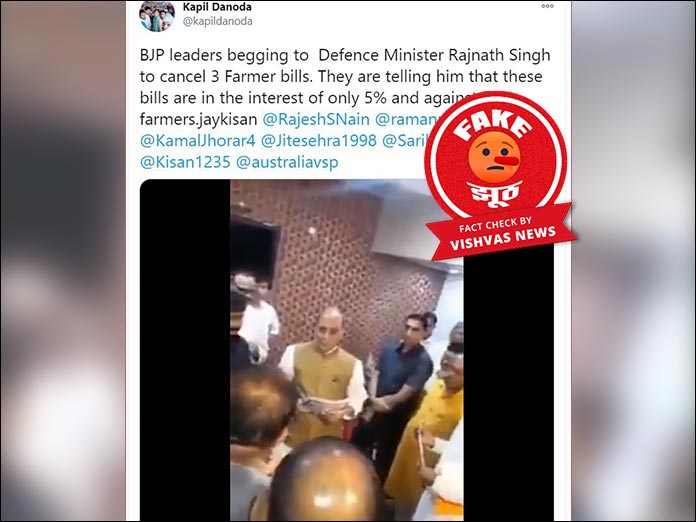 Vishvas News had investigated the video earlier and at the time, the same video was viral in the name of NRC. As per our investigation, in August 2018, some people in Lucknow met Rajnath Singh and submitted a memorandum against the SC / ST Act. This video is of 2018 and has no relation with the recent farmers movement.

Uploading the video on January 12, 2021, the Twitter user Kapil Danoda wrote: ‘BJP leaders begging to Defense Minister Rajnath Singh to cancel 3 farmer bills. They are telling him that these bills are in the interest of only 5% and against 70% farmers. ‘

The archived version of the tweet can be seen here.

Vishvas News used the InVID tool to extract screengrabs of the video and performed Google reverse image search of the screengrabs obtained.

In the next phase of the investigation, we started searching for Bhishma Dhar Dwivedi found his profile on Facebook. The same video was uploaded on this account on September 26, 2018.

In a conversation with Vishvas News, Bhishma Dhar Dwivedi told us: “The video is from August 5, 2018. At that time we gave a memorandum against the SC / ST Act in Lucknow.”

Conclusion: Vishvas News investigated and found that, in August 2018, some people in Lucknow met Rajnath Singh and submitted a memorandum against the SC / ST Act. This video is of 2018 and has no relation with recent farmers movement.