Fact Check: Video of Sonia Gandhi from seven years ago being shared in wrong context 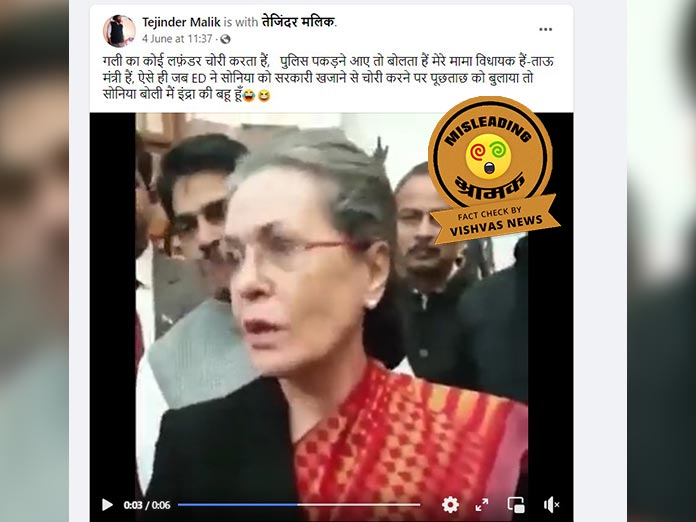 Vishvas News (New Delhi): The Enforcement Directorate (ED) has issued notices to Congress President Sonia Gandhi and MP Rahul Gandhi in the National Herald money laundering case and summoned them for questioning, recently. A video of Sonia Gandhi is being shared on social media by linking it to this case. In the video, Sonia Gandhi is saying, “I am Indira Gandhi’s daughter-in-law, not afraid of anyone.” It is being claimed that after ED issued the notice, Sonia Gandhi has given this statement. Vishvas News in its investigation found that this claim is misleading. The video is almost 7 years old. It has nothing to do with the recent notice sent to Sonia Gandhi by the ED.

Facebook user Tejinder Malik (archive) shared this video of Sonia Gandhi and wrote, “When ED called Sonia for questioning for stealing from public treasury, Sonia said I am Indra’s daughter-in-law.”

To know the truth behind the viral video, we started searching on Google using several keywords. We found a report related to the viral video on the Navbharat Times website. It was published on 8 December, 2015. According to the report, Sonia Gandhi said this in 2015. When a trial court in Delhi asked her and Rahul Gandhi, along with five others to appear in the National Herald case. The Congress had appealed to the Delhi High Court to quash the summons, but the court rejected the appeal. The petitioner Subramanian Swamy had accused the Congress leaders of cheating in the court. Responding to which Sonia Gandhi gave this statement. Many other news websites also published this news.

We found the Original video on the official YouTube channel of Indian Express. It was uploaded on 8th December 2015. The same information is given in the caption and description. NDTV had also published a report on the same.

For more information, we contacted Sanjay Mishra, Assistant Editor covering politics at Dainik Jagran. We shared the viral claim with him. They told us that the viral claim is misleading. This video is very old. In the recent past, Sonia Gandhi has not made any such statement. Users are sharing old videos in the wrong context.

This post was shared by a user named Tejinder Malik who has 551.3K members on Facebook. According to the profile he lives in Ghaziabad.

Conclusion: In the investigation of Vishvas News, the claim about the viral video of Sonia Gandhi was found to be misleading. The viral video is almost 7 years old. It has nothing to do with the recent notice sent to Sonia Gandhi by the ED.