Fact Check: Video showing remedy for turning white hair to black permanently in half an hour is fake 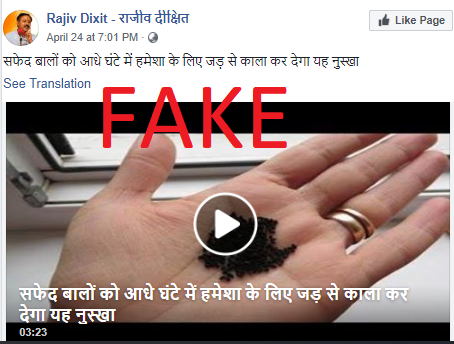 The viral video claimed that a mixture of two spoons of amla oil and a small amount of coffee powder when applied to hair can convert white hair to black permanently. The video was supported with a caption that claimed that white hair can be permanently turned black from roots by following this remedy.

A fact check revealed that the claim is false and white hair cannot be turned to black permanently in half an hour.

We contacted some doctors and asked whether they can validate the claim mentioned in the video and their responses were as follows:

Dr Lipy Gupta, Dermatologist, New Delhi:“This is a false claim. This treatment of turning white hair to black permanently in half an hour is not true.”

There were comments from various users that stated that this is a fake video.

The post was shared from the page named ‘Rajiv Dixit – राजीव दीक्षित’.

We used StalkScan and checked the videos and photos shared by the page. We observed that many posts from the page were misleading.

Conclusion: No, the mixture of 2 spoons amla oil and coffee cannot turn white hair to black permanently in half an hour.