The viral claim about toll charge in the name of Union Minister Nitin Gadkari is fake. This message has gone viral earlier and has been denied by the Transport Ministry. 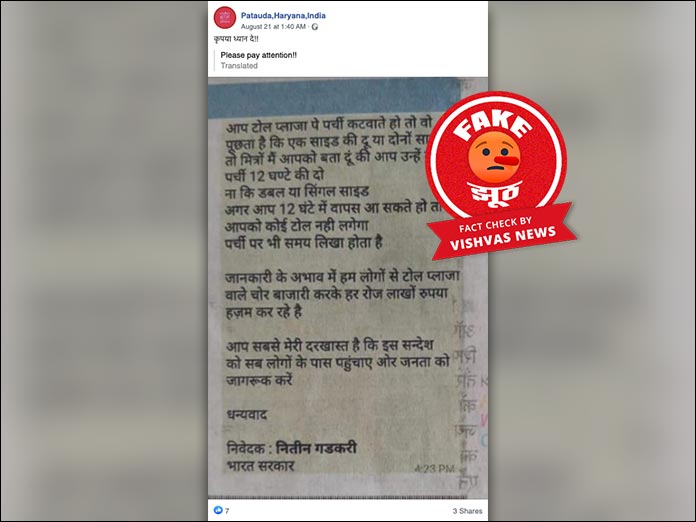 New Delhi (Vishvas Team). A post on social media is viral with a claim that you do not have to pay the toll charges if you return within 12 hours of the journey. The announcement has been attributed to Union Transport Minister Nitin Gadkari.

The picture is viral with similar claims on different social media platforms. It looks like a screenshot of a WhatsApp message. A Facebook page named ‘Patauda, Haryana, India’ has is one among the several users who had shared this claim.

The post reads, “If you are at a toll plaza and the toll man asks you whether you want a one way slip or return slip as well, ask him to give you a 12 hours slip. You can do this if you are planning to return within 12 hours. In this case, you won’t be charged for both sides, you just have to pay for one side. The slip always has time mentioned, so if you return within 12 hours, you don’t have to pay the double charges. Due to our lack of information, the thieves at toll plazas are snatching away millions of rupees from us every day. I request all of you to send this message to everyone. And make the public aware.”

The archived version of this post can be viewed by clicking here .

Vishvas News first searched this claim with using the keywords (Toll charges, 12 hours, Nitin Gadkari etc.). We came to know that this claim has already gone viral. We received reports since 2018, which mention the same claim. This claim has also been denied in those media reports. As part of the investigation, we accessed a tweet posted on 28 December 2018 from the official Twitter handle of the Ministry of Road Transport and Highways. This tweet refers to the same viral message and the ministry has clarified that the information is falsely attributed to Gadkari.

The ministry has also explained the rules of toll charge in this tweet.  Vishvas News contacted Gorakhpur project director SP Pathak of the National Highways Authority of India (NHAI) in reference to this viral message. He told that this viral message is completely false.  “Earlier, if one returns within 24 hours of the journey, there used to be rebate in toll charge, but now this is given to promote fastag. Viral message is fake,” said Pathak.

We did a social scanning of a Facebook page called Patauda, ​​Haryana, India. The page had 678 followers and is active since 29 July 2015. According to the information given on the page, its address, VPO – Patauda Distt. – Jhajjar (HARYANA) is Jhajjar, India.

Conclusion: The viral claim about toll charge in the name of Union Minister Nitin Gadkari is fake. This message has gone viral earlier and has been denied by the Transport Ministry.