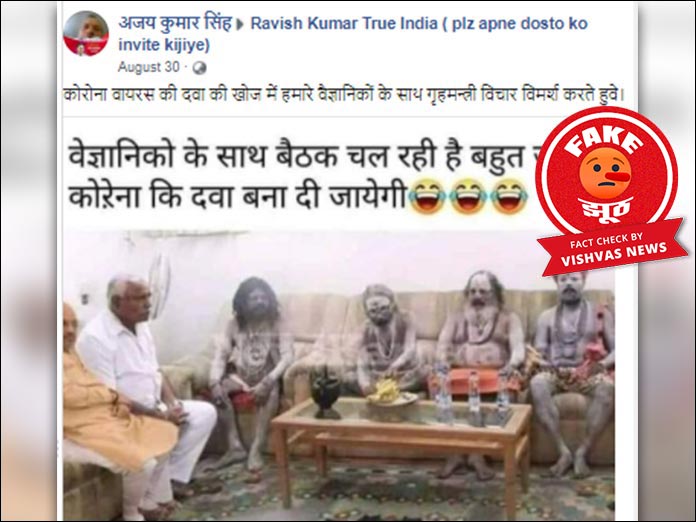 New Delhi (Vishvas News): One can notice a viral picture on social media, where Home Minister Amit Shah and Karnataka Chief Minister BS Yediyurappa and some Naga Sadhus are seen sitting. The post claims that the picture that went viral is recent when Amit Shah met with Naga Sadhus. In the investigation by Vishvas News, the post was found to be fake. The original picture is that of Karnataka Chief Minister BS Yediyurappa and a few Naga Sadhus. The picture was edited and the picture of Amit Shah was introduced in the original picture.

To research about the picture which is going viral over the internet, we took a screenshot of the image and applied Google Reverse Image Search over it. We found the original picture on, ‘BTv News Kannada‘ YouTube channel in a video uploaded on 2nd October 2017. According to the news, the picture belongs to the Yediyurappa’s Bangalore house situated in the Dollars colony, where he had met with a few Naga Sadhus. It is clearly visible in the video that no one is sitting besides Yediyurappa.

During the same time, some of the other media houses too covered this news. According to a news report by Times of India, many Naga Sadhus had come to meet Yediyurappa and had blessed him to be elected as chief minister of Karnataka again. During this incident Yediyurappa was Karnataka BJP President.

We now wanted to know as to which of the Amit Shah’s pictures were chosen to be edited into the picture. For this, we took a screenshot of Home Minister Amit Shah’s photo from the viral photograph. We again used the Google Reverse Image on the image and found the viral picture of Amit Shah on the Indianexpress.com website. This photo is of May 2019, when after the victory in the 2019 elections, Amit Shah, and PM Narendra Modi went to meet Murli Manohar Joshi and Advani.

We interacted with Delhi BJP spokesperson, Tejinder Pal Singh Bagga to verify the image, he confirmed that the viral image is photoshopped.

Conclusion: In the investigation by Vishvas News the claims made by the user were found to be false. In the original picture Karnataka chief minister BS Yediyurappa is interacting with a few Naga Sadhus. Someone has edited the picture to include the picture of home minister Amit Shah in it.