Vishvas News in its investigation found that the viral post is fake. Some social media users are sharing the edited image of the platform ticket of Pune, with false claims. 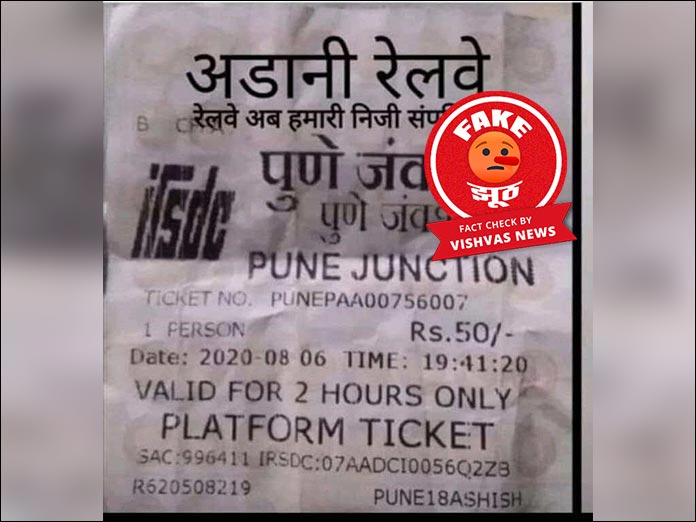 New Delhi (Vishvas News): Amidst the ongoing farmers protest in Delhi, social media is abuzz with claims related to businessman Gautam Adani. Whether it be Indian Railways or Ahmedabad airport, the claims are being connected to businessman Adani where the social media users claimed that both have been bought by Adani.

Claim:
A platform ticket is going viral on the social media platform. People are sharing the image of platform tickets on Facebook, Twitter and WhatsApp and are claiming that Indian Railways has now become Adani Railway.

Facebook user, Ashok Kumar on 27 December uploaded the edited platform ticket and wrote (translated in English): The process of looting the public has begun.

Investigation:
Vishvas News conducted a Google search first and searched, ‘Pune platform 50 Rs’. During the search, we found many websites where we found the news stories about the Pune platform ticket. According to a news on Navabharat Times, the rate of platform ticket of Pune Railway Station has been increased. Read the entire news here.

During the investigation we found a tweet by a Railway spokesperson. In the tweet he had said that the rates of Pune platform ticket has been increased to Rs 50 to ignore the unnecessary rush at the railway station to follow the social distancing measures. The rates of platform tickets have been controlled to put restrictions of this kind.

In the further investigation by Vishvas News, we contacted the public relations officer of Pune division, Manoj Zavar. He informed that due to Covid-19 and to avoid rush, some restrictions have been put. However, pregnant women, old and ill and their family members only are being sold the platform tickets. The rates of the ticket are being increased so as to put a stop to the unnecessary crowd. The claim of Adani Railway is entirely fake.

We now did a social background check of the account that shared the fake post. We found out that Facebook user Ashok Kumar is a resident of Delhi. He created his account in February 2015.

Conclusion: Vishvas News in its investigation found that the viral post is fake. Some social media users are sharing the edited image of the platform ticket of Pune, with false claims.