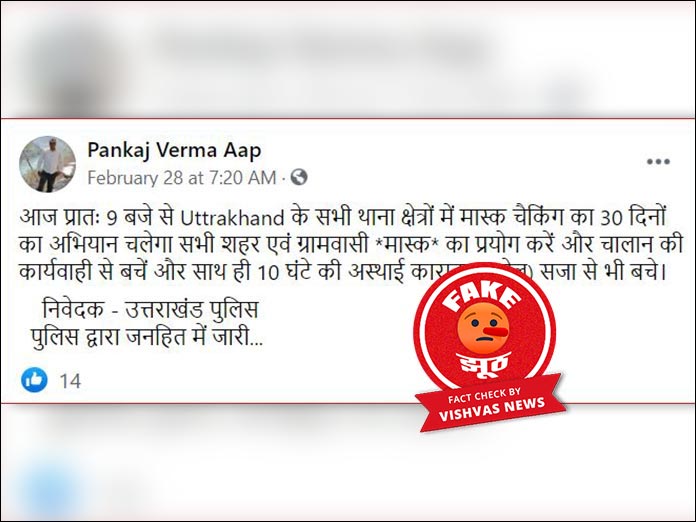 New Delhi (Vishvas News): A fake message attributed to Uttarakhand Police is going viral on social media. It has been claimed that a 30-day special mask checking campaign will be carried out by the police in the entire Uttarakhand.

Vishvas News investigated the viral posts and found that this message has gone viral earlier as well falsely attributing to UP Police. The viral message is fake. No such 30-day campaign of mask checking is being carried out by Uttarakhand Police.

Facebook user Pankaj Verma AAP wrote in a post, claiming: “From 9 am today, a 30-day campaign for mask checking will run in all the police stations of Uttarakhand. People of all cities and villages will use masks and avoid challan proceedings as well as a 10-hour jail sentence. Released in the public interest by Uttarakhand Police.”

Vishvas News searched using appropriate keywords on Google. We didn’t find any report regarding the 30-day special campaign. However, we found a report stating that it is mandatory to wear a mask. and the fine will be imposed if caught without a mask. Not only this, a penalty will be imposed for throwing the mask outside the dustbin and on the streets. Jagran.com published news related to the same on February 25, 2021.

Vishvas News also contacted Dainik Jagran’s Dehradun office. The Crime Reporter of Dainik Jagran, Soban Singh Gusain, spoke to Ashok Kumar, Director General of Police, Uttarakhand where he said that no such 30-day operation of mask checking is being carried out by Uttarakhand Police nor any such information has been circulated. He further said that one should not pay attention to such misleading news, whoever spreads such fake news, legal action will be taken against them.

We scanned the profile of Facebook user Pankaj Verma who shared the viral post. We found that the user is based out of Rishikesh.

Conclusion: Vishvas News investigated the viral post and found that the message regarding the 30-day campaign of mask checking by Uttarakhand Police is fake.