Fact Check: Viral picture in the name of PM Modi and his mother does not have any relation with them

In the investigation of Vishvas News, the post viral in the name of PM Modi and his mother proved to be fake. 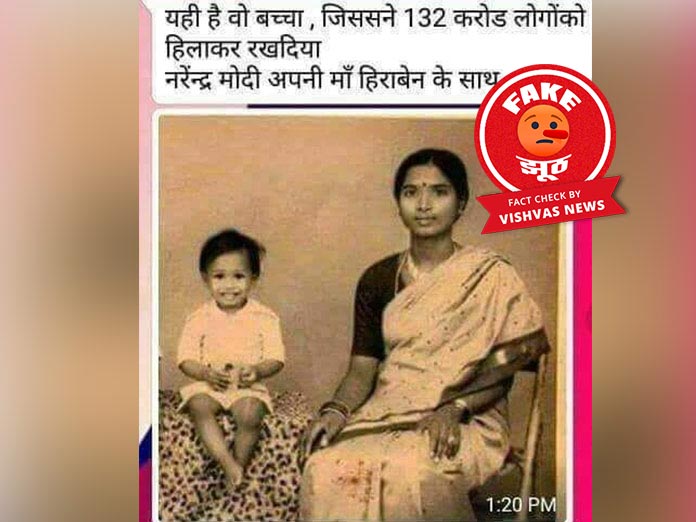 New Delhi (Vishvas News): A picture going viral on social media shows a child sitting with his lady. As per the claim the picture is of Prime Minister Narendra Modi with his mother Heeraben. Vishvas News investigated the viral post. The same picture is also viral in the name of the former President of the country, Dr. APJ Abdul Kalam. When Vishvas News contacted PM Modi’s brother regarding the photo, he stated that the viral claim is fake.

Facebook user Arjun Lal uploaded a picture on his account on January 11. It was written in the picture that this is the child who shook 132 crore people. Narendra Modi with his mother Hiraben.

Vishvas News used Google reverse image search tool to find out the truth of the picture viral in the name of PM Modi and his mother. On searching the image, we found this image in many reports on the Internet viral with the claim of former President of the country Abdul Kalam Azad.

During the investigation, we also found the original picture on the account of a Facebook user named Maryala Srinivas. While uploading it, the user stated that this picture is of his family. Sometimes it has become viral in the name of Narendra Modi and sometimes Abdul Kalam. View the post here.

This picture was posted by the user on Facebook in 2011. Posting it, it was clearly written that this is our family in the picture – father, sister, me, brother, and mother. This post can be viewed below and by clicking here.

Vishvas News contacted PM Modi’s brother Prahlad Modi and shared the viral picture with him. He told that the viral post is fake and that his mother is not present in the picture.

Vishvas News does not independently confirm the viral picture, but one thing is confirmed that it is not of PM Modi and his mother.

Vishvas News scanned the profile of the user who shared the fake post. Social scanning of the Facebook user Arjun Lal revealed that he is a resident of Nawalgarh, Rajasthan, and is currently living in Bahrain.

Conclusion: In the investigation of Vishvas News, the post viral in the name of PM Modi and his mother proved to be fake.