Vishvas News investigated the viral post and found it to be misleading. The Yatra has been postponed for a few days for the maintenance of the containers that house the ‘Bharat Yatris’. The dates for the same were announced earlier. 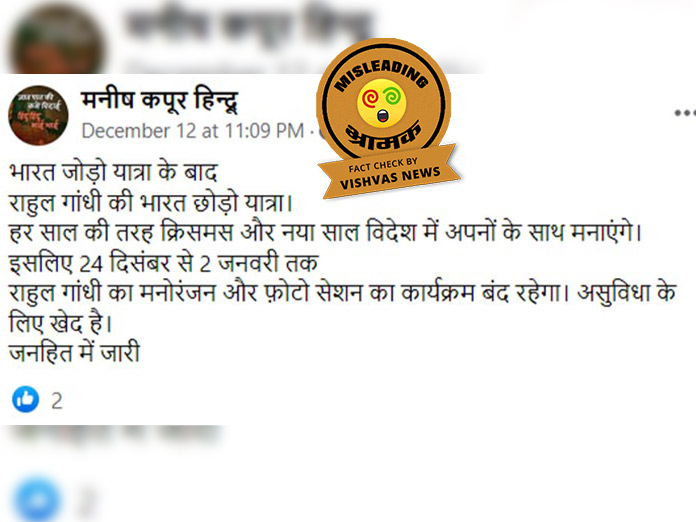 News Delhi (Vishvas News). Amid the ongoing Bharat Jodo Yatra by the Congress party, a post is going viral targeting Rahul Gandhi. In the post, it is claimed that Rahul Gandhi has put the march on halt between December 24 and January 2 so that he can celebrate Christmas and New Year abroad with his family and friends.

Vishvas News investigated the post and found that the Yatra has been postponed for a few days for the maintenance of the containers that house the ‘Bharat Yatris’. The dates for the same were announced earlier, and the viral video turned out to be misleading.

On December 12, Manish Kumar Hindu, a Facebook user, wrote in the group ‘Kangana Ranaut’, (English translation)” After Bharat Jodo Yatra, Rahul Gandhi’s Bharat Choro Yatra. Like every year, Rahul Gandhi will celebrate Christmas and New Year with his loved ones abroad. That’s why Rahul Gandhi’s entertainment and photo session programmes will be closed from December 24 to January 2. Sorry for the inconvenience.”

In order to get more details about the claim, Vishvas News first used ‘Google Open Search Tool’. We found that there is a lot of discussion going on in political circles regarding the timing of the break. However, amid the ongoing talk, the question is: where will Rahul Gandhi stay during this break?

Vishvas News wanted to know whether any leader has said anything regarding Rahul Gandhi’s programme. The official YouTube channel of Congress was then scanned. In a video that was uploaded on December 9, Congress General Secretary Jairam Ramesh can be seen saying that the Yatra will reach Delhi by the night of December 24. From January 2, the Yatra will move towards UP, Haryana, Jammu and Kashmir.

He can be heard saying in the video that the maintenance of the container is required and that the arrangements for the winter will be made.

Jairam, while answering a question from a journalist, can be heard saying that Rahul Gandhi will stay in Delhi during the stopover of the Bharat Jodo Yatra. He will also be present at the Parliamentary session.

The Congress press note also mentions that the Bharat Jodo Yatra will be postponed for a few days for the maintenance and repair of the containers.

Speaking to Vishvas News, Congress secretary Vineet Punia clarified that Jairam Ramesh had already made it clear that the Bharat Jodo Yatra would be halted from December 24 to January 2. The journey has been suspended for a few days for maintenance and repair of the container in transit. The BJP keeps spreading such lies to divert attention from the main issues, but the public is not going to be misled by them, he said.

The Facebook user who shared the post is a resident of Rae Bareli. No further information could be found about the user.

Conclusion: Vishvas News investigated the viral post and found it to be misleading. The Yatra has been postponed for a few days for the maintenance of the containers that house the ‘Bharat Yatris’. The dates for the same were announced earlier.