Fact Check: Viral post claiming UP Police won’t be able to check vehicles as per new order from Chief Minister is fake 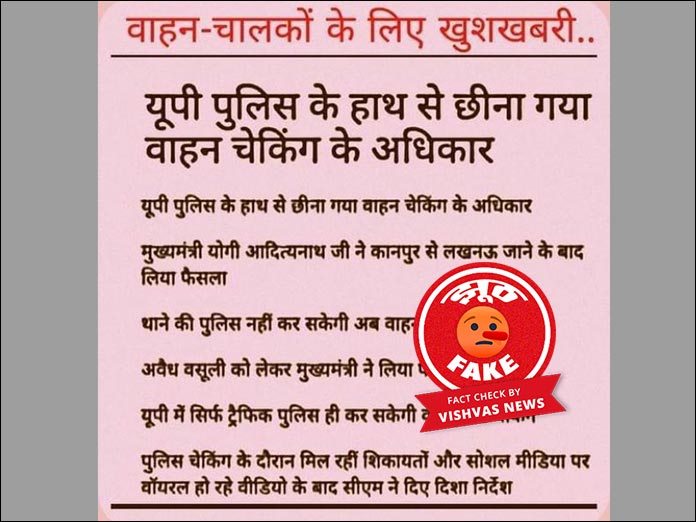 New Delhi (Vishvas Team). A viral message on social media claims that UP police will not be able to check vehicles as Uttar Pradesh CM Yogi Adityanath has framed new rules. Vishvas News received this message on Fact-Checking WhatsApp Chatbot (+91 95992 99372). Vishvas News investigation revealed the claim to be fake.

This alleged claim that UP police cannot check vehicles is shared on different social media platforms. The message reads, “UP Police will not be able to check vehicles… Due to corruption issues, Uttar Pradesh CM Yogi Adityanath took this decision. Now only Traffic Police can check vehicles. The CM gave the guidelines after complaints received during vehicle checking..”
The archived link to this post can be accessed here. Several users have shared posts with similar claims.

Vishvas News first searched the Internet using keywords. We found a news article published in September last year. According to Dainik Jagran report published on 28 September 2019, following the increased complaints of recovery during vehicle checking, DGP OP Singh directed the police not to stop vehicles for checking vehicle documents. It has been reported in the news that only DL checks of drivers violating traffic rules will be done. This news can be read in detail here.
We contacted Rahul Srivastava, SP City of Jhansi. “This rumour originated a few months ago. There is no truth in it,” said Srivastava.

We spoke to UP Traffic Police about this viral message. “This message has gone viral before 3-4 months… Vehicle checks are to prevent passengers or miscreants from using stolen vehicles. … Most of the document checks are now carried out through mobile phones. There is no justification for asking paper documents,” said a Traffic police officer who didn’t wish to be named.

Dharmendra Pandey, our colleague and member of Jagran Digital’s Lucknow bureau clarified the same to us on call. On quoting Uttar Pradesh DGP’s PRO, Pandey said that former DGP OP Singh issued the order for police to check only DL. The PRO has denied any new orders as in the claim.

We scanned the profile of user Neeraj Srivastav who shared this message on Facebook. He is a resident of Gaya and had 226 followers.

Conclusion: The viral claim is fake. Former DGP OP Singh had instructed not to stop a passenger for checking vehicle documents. He allowed the police to check DL of drivers violating traffic rules.