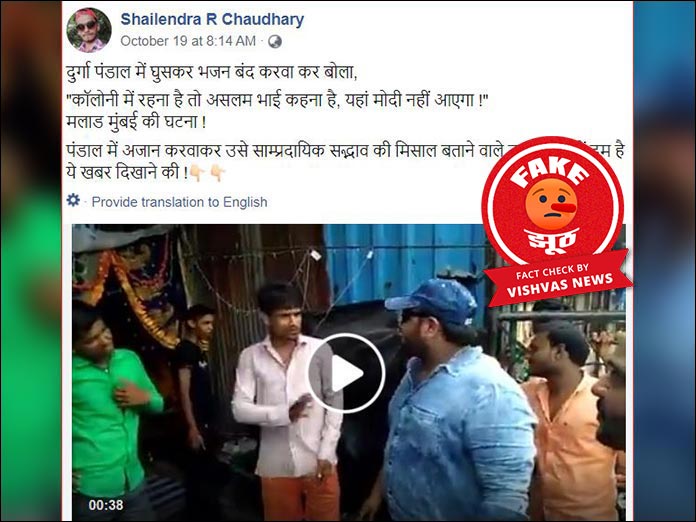 New Delhi (Vishvas News): A video is going viral now on social media, in this video one can see a person in blue shirt asking to stop the bhajans being played in the Durga pandal. The name of Aslam Bhai is mentioned in the video. Users are claiming that the video was shot in Mumbai’s Malad where a person is seen forcefully entering the pendal and asking to stop the bhajan.

Translation: He entered the the pendal and asked to stop the bhajan, he said, “If you wish to stay in the colony you must chant the name of Aslam Bhai, Modi will not come here”. This is an incident of Mumbai’s Malad. Will the news channels now show this video.

You can watch the achieve version of the post here.

Vishvas News at the beginning of the fact-check uploaded the video in InVID tool and got the screenshots from the video. After this, we did a Google Reverse Image Search on the picture and found the news posted on goanews.in website along with a picture. The news was uploaded on 18 October 2019. It was mentioned in the news that this video was an attempt to defame the Malad Congress MLA Aslam Sheikh. Read the entire news here.

After that we searched news and the videos related to the incident using various keywords. We found a video of MLA Aslam Sheikh. This video was uploaded on YouTube on 10th October 2019. In this video we saw Aslam Sheikh put forth his thoughts. He told the viral video to be fake. This, in his opinion was created to cause unrest.

During the investigation we also found a news on BBC Hindi. In this news published on 11 October 2019, the fact-check was on done in Hindi on the viral video. It was found that the man in this video is Ashish Singh.

Ashish also sent us the old tweets of his. It also included the copy of the police complaint and also shared the video version of the explanation. In the video version, the person going viral could be seen, both these people were seen giving explanation over the fake video that went viral.

After the preliminary investigation we contacted, senior inspector, Jagdeo Kalapad from Malwani Police Station. He informed Vishvas News that the video went viral last year, complaints too were made about the same, however it was later found out that the video was made for fun in the TikTok style.

At the end, we did a social background check on the user who posted this video, we found out that Facebook user, Shailendra R Chaudhary is a resident of UP. His account is followed by over 300 people and he is affiliated to a particular political party.

Conclusion: Vishvas News in its investigation found that the viral post is fake. Last year the video was made for entertainment purpose and later went viral when people believed it to be true.