Fact check: Viral video of lights over lake is not of Nagpur, but Dal lake

Vishvas News in its investigation found out that the video of the light show is not of Nagpur but of Dal lake, Srinagar. 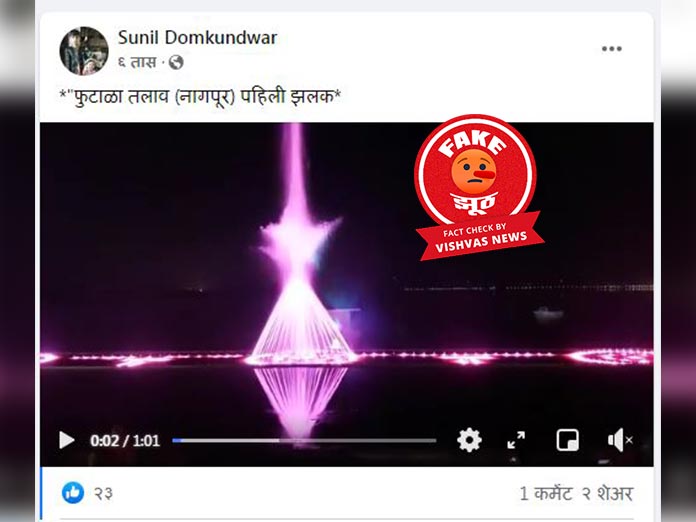 New Delhi (Vishvas News): Vishvas News came across a video being widely shared on various social networking platforms. The video showed light show over a lake. Users claimed that the video belonged to Nagpur, Maharashtra. However, Vishvas News in its investigation found out that the video is from Dal lake in Srinagar.

Facebook user, Sunil Domkundwar posted a video of a light show that illuminated over a lake.

Vishvas News in the first step of investigation took a good look at the video and then searched for videos of Futala lake online.

The video looked like the lake but the tiles at the lake side are not the same as that of the viral video as seen in the post.

Vishvas News then searched the screengrabs of the video, using the InVid tool.

We found the similar video on various YouTube channels.

However, we found the exact same video uploaded on the YouTube channel, Auckland Desi on September 20, 2021.

Vishvas News in the last step of investigation contacted Nagpur ANI correspondent, Saurabh Joshi. He informed that though there are reports of Futala lake redevelopment, the process is still underway. He also said that the light show had not begun at Futala lake and that the video is not of Nagpur.

Vishvas finally did a social background check on the social media user who shared it. Sunil Domkundwar is a resident of Nagpur. He is followed by 138 people and has 2390 friends.

Conclusion: Vishvas News in its investigation found out that the video of the light show is not of Nagpur but of Dal lake, Srinagar.