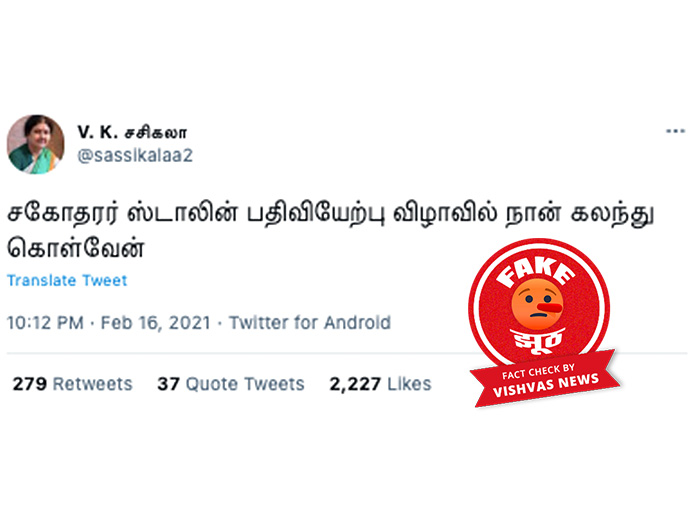 New Delhi ( Vishvas News). A viral tweet allegedly from the twitter handle of VK Sasikala states she will take part in the swearing-in ceremony of DMK party chief MK Stalin.

Vishvas News investigation revealed the twitter handle is fake and is not officially verified account. AMMK spokesperson denied the claims saying VK Sasikala has not made any such statement.

A picture of a tweet allegedly from VK Sasikala (@sassikalaa2) stating she would participate in the swearing-in ceremony of DMK Party chief MK Stalin is viral on Facebook recently. The archived version of the tweet can be seen here.

While we found news reports on VK Sasikala staking claim to Jayalalithaa’s legacy ahead of 73rd birth anniversary of Jayalalithaa, we did not find authentic reports confirming the claim.

Social scanning of the alleged twitter profile of VK Sasikala (@sassikalaa2) raised further doubts because of the unusual bio and absence of blue tick, confirming it is not a verified twitter account.

Vishvas News contacted Amma Makkal Munnettra Kazagam (AMMK) office for verification. “She (VK Sasikala) does not have a twitter account. The  viral posts are fake,” said Arun Kumar, a spokesperson.