Fact Check: Woman in this picture with PM Modi is not Adani’s wife, viral claim is fake 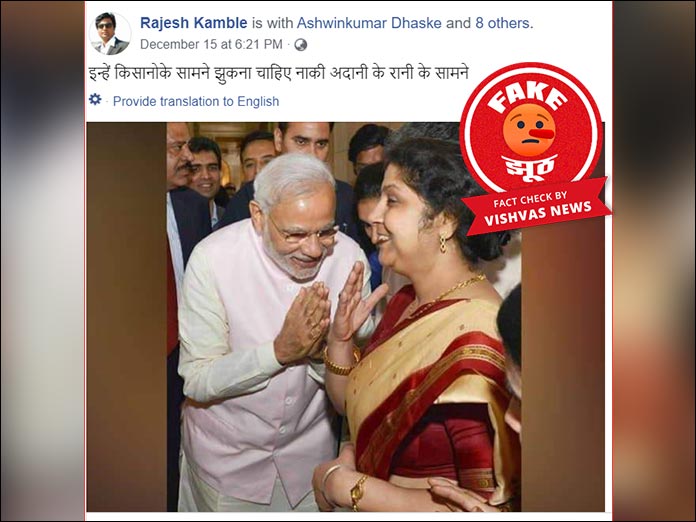 New Delhi (Vishvas News). Amid several rumours about businessman Gautam Adani, a viral picture of Prime Minister greeting a woman with folded hands is shared with a claim that she is Adani’s wife.

Vishvas News investigation revealed the viral claim is fake. The woman in the picture with PM Modi is Deepika Mandal, founder of an NGO.

Vishvas News first searched for the viral picture using Google Reverse Image search tool and found the original picture in VTV Gujarati news website.  It clarifies that the woman in the picture with PM Modi is Deepika Mandal and the picture was captured during an event in 2015.

We searched on the Internet for news about Deepika Mandal and PM Modi’s picture. We found it in an article by OneIndia published on 9 April 2018 that identifies Mandal as the executive of an NGO named Divya Jyoti Cultural Organization and Welfare Society in New Delhi.

Vishvas News contacted Deepika Mandal to verify the claim. Her husband Samar Mandal refuted the fake claims and clarified to us that the woman in the picture is his wife Deepika.  “This is a very old and popular picture. The picture is viral with false claims,” said Samar.

Facebook user Pradeep Kasani is one among the many users who had shared this post and social scanning of his profile revealed that he has shared a lot of viral content even in the past.

Conclusion: The viral post is fake. The woman in the picture with PM Modi is not Adani’s wife. She is Deepika Mandal, the executive of an NGO in New Delhi.