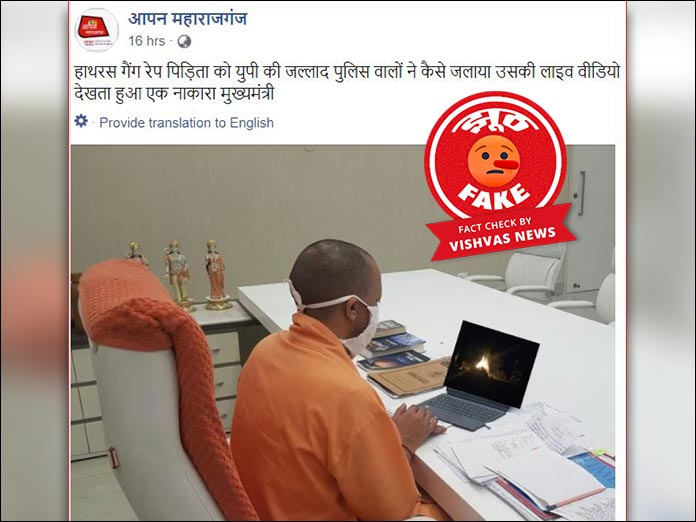 New Delhi (Vishvas News). Ever since the crime incident in Hathras, Uttar Pradesh, there has been a flood of rumors on social media. One such post about Hathras incident and UP Chief Minister Yogi Adityanath is viral on social media. CM Adityanath’s picture with a digital screen probably a laptop is shared with a claim that he is watching a live video of Hathras victim’s funeral.

Vishvas News investigation revealed the claim is fake. We could confirm that an edited image of the digital screen during a conversation with the victim’s family has been made viral with fake claims.

We started searching for news related to Hathras in ePapers of authentic newspapers. We found the real photo in Dainik Jagran’s Hathras edition. The caption confirmed to us that Chief Minister Yogi in Lucknow on Wednesday was making video calls to the Hathras victim’s family. The information department of the UP government has released the picture.

We scanned the official social media account associated with the UP government. We found the real picture in a tweet from Chief Minister’s Office (@CMOfficeUP), captioned, “Chief Minister Shri @myogiadityanath ji interacted with the victim family of Hathras through video calling. The victim’s father demanded stern action against the accused.”

We contacted Mrityunjay Kumar, media advisor to Chief Minister Yogi Adityanath. While sharing the original picture with us, he said that the viral picture is edited.

Social scanning of the FB page that shared the viral post revealed that it has more than five lakh people followers.

Conclusion: An edited image of the digital screen during Chief Minister’s conversation with the victim’s family is viral with fake claims.