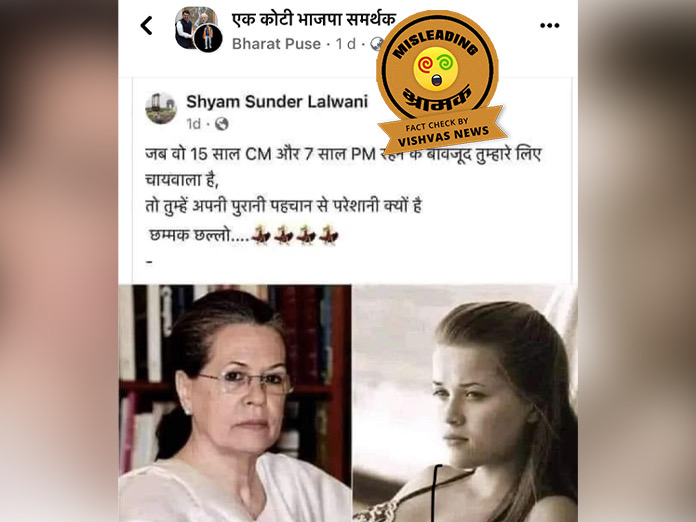 New Delhi (Vishvas News): Vishvas News came across a post widely shared on Facebook. The post consisted of two pictures, one picture was of the Indian politician and Congress leader Sonia Gandhi. The other was claimed to be that of Sonia Gandhi from when she was young. Vishvas News did a fact check of the post and found that the other picture in the post is that of the American actress Reese Witherspoon.

Vishvas News started its investigation by cropping the picture on the right. We then searched this image using Google Lens.

Vishvas News was directed to an article titled: 30 Pictures of Young Reese Witherspoon

The article stated: “This gallery features a beautiful, young, Reese Witherspoon”, including photos of her when she was a kid, as well as her teenage years and into her early 20’s during the mid-1990s.

We found this viral picture on 8th number in the article.

We also found this picture in an article titled: Relive Reese Witherspoon’s Last 25 Years in Hollywood, in Photos

We also found the viral picture on the stock images website, alamy.com. The caption said thaat this was a picture of Reese Witherspoon from Fear in 1996.

It was hence clear that the viral picture is of American actress Reese Witherspoon.

We then checked for old pictures of Congress leader Sonia Gandhi. We got a picture of a young Sonia Gandhi in an article on rediff.com.

We also found a few pictures in an article on NDTV.

In the next step of investigation we spoke to Congress spokesperson, Rajni Patil. She told us that the viral picture is not of Congress leader Sonia Gandhi. She also called out trolls and the negative mindset of people for spreading such news. She also told us that since 1990s Sonia Gandhi was very active in the politics and has never dressed in a way shown in the viral post.

In the last step of investigation we did a social background check of the Facebook user. Bhushan Puse is a resident of Aurangabad and is followed by 2,071 people.