Fact Check: This viral image was taken in 2014; not linked to liquor ban in Bihar

Vishvas news investigation revealed the viral post is fake. Several users are sharing the image on social media since 2014, by linking it with Bihar. 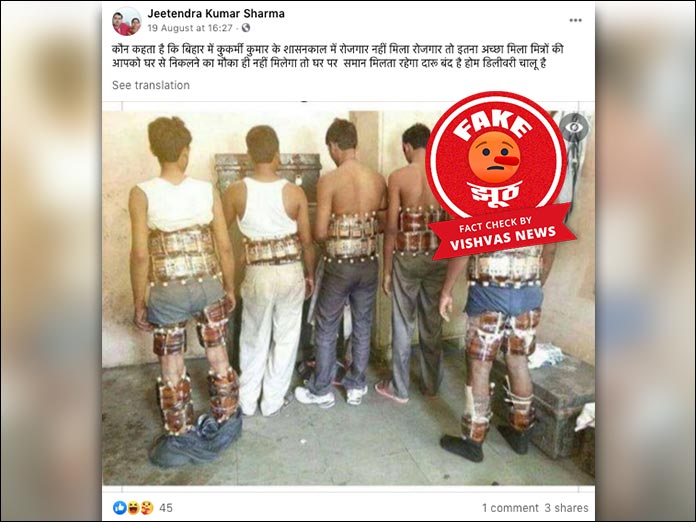 New Delhi (Vishvas News). A picture of five men tied with liquor bottles to their bodies is becoming increasingly viral on social media since 2014. The picture is shared with the claim that liquor is sold in this manner in Bihar under Chief Minister Nitish Kumar’s rule.

Vishwas News investigation revealed the claim to be fake and picture to be old and viral since 2014. There was no liquor ban in Bihar at that time.

Facebook user Jitendra Kumar Sharma uploaded a picture on August 19 at 4:27 pm with a claim, “Who says that employment was not found in Bihar during the reign of Kumar, employment was so good, friends, if you do not get a chance to get out of the house, you will get the same at home. Home delivery is on.”

Vishvas News first searched for viral image using Google reverse image search tool.  We found that it was uploaded on 26 September 2014 using the Timeline Tool. The picture was tweeted in a Twitter handle named ‘That Gaon Guy’ captioned, how not to smuggle alcohol from Goa.

While we searched for details of Chief Minister in 2014, we through the site www.elections.in, we came to know that the Chief Minister of the state was Jitan Ram Manjhi from 20 May 2014 till 22 February 2015. The oldest picture going viral is also during this period. Till then, there was no liquor ban in Bihar.

Now we searched further to know about the implementation of liquor ban in Bihar. According to media reports, Bihar had implemented the prohibition of liquor laws across the state from 5 April 2016. You can read the news published here on Jagran.com.

In the next phase of the investigation, we reached Patna, the capital of Bihar. Amit Alok, in charge of Bihar of Jagran.com, told us that the viral picture has nothing to do with alcohol consumption. This picture is not from Bihar.

In the end we investigated the fake viral post. We came to know that Facebook user Jitendra Kumar Sharma hails from Patna.

Conclusion: Vishvas news investigation revealed the viral post is fake. Several users are sharing the image on social media since 2014, by linking it with Bihar.