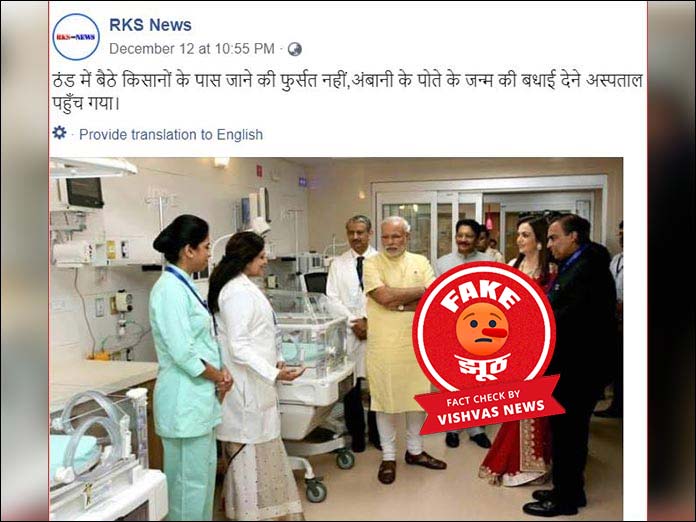 New Delhi (Vishvas News): A picture of Prime Minister Narendra Modi is going viral on social media. In the picture, PM Modi can be seen in a hospital with Mukesh Ambani. The picture is now going viral on social media with a false claim associating it with the farmer’s movement. As per the claim, the Prime Minister is not meeting the farmers but went to the hospital to meet Mukesh Ambani’s grandson.

Vishvas News investigated the viral post and found that the picture is of 2014. At that time, PM Modi went to Mumbai to inaugurate a hospital of Reliance Foundation where he met Mukesh Ambani.

On December 12, Facebook user RKS News wrote, uploading a picture: ‘There is no time to go to the farmers sitting in the cold. But, he reached the hospital to congratulate Ambani on the birth of his grandson.’

Prime Minister Narendra Modi, Mukesh Ambani and Nita Ambani can be seen in the picture. The archived version of the post can be seen here.

Vishvas News uploaded the viral image to the Google reverse image tool. We found it on the website named Original Picture India Info Line. This photo was used in the news uploaded on October 27, 2014.

As per the news report, Prime Minister Narendra Modi reached Mumbai at the inauguration of Shri HN Reliance Foundation Hospital and Research Center.

Vishvas News contacted the spokesperson associated with Reliance Group. He told us that the picture is from October 2014, when the hospital was inaugurated.

Conclusion: 6-year-old picture of the inauguration of hospital viral as recent associating it with farmer’s movement.