The infographic claiming WHO issued 7 brain-damaging habits is falsely attributed to the organisation. Some of the habits listed may have other adverse effects on health, but no direct impact on brain damage has been reported yet. 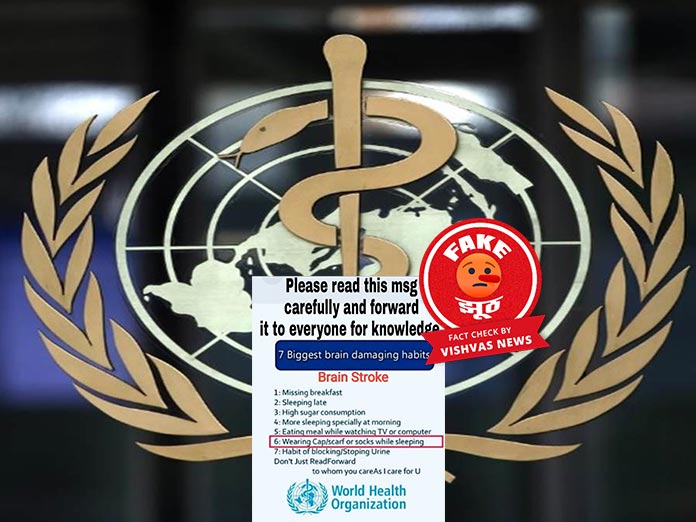 New Delhi (Vishvas News): An infographic from the World Health Organization (WHO) detailing the seven biggest brain damaging habits that lead to brain stroke is viral on social media.

Vishvas News, in its investigation, found the viral template to be falsely attributed to the United Nations agency responsible for international public health.

Facebook user Pijus Kanti Giri, shared an infographic on his profile on September 19, 2022.

Vishvas News, on analysing the above claim, observed several abnormalities in the viral infographic. There were many grammatical mistakes, spacing issues, and syntax errors as the fonts were uneven and the WHO logo wasn’t used. Even the words ‘Don’t Just ReadForward to whom you care As I care for U’ had spacing issues and the usage of ‘U’ for ‘you’ depicted a casual approach often not taken up by international organisations.

On searching Facebook with the keywords ‘7 brain damaging habits WHO’, we discovered many similar claims here, here and here. All had the same content, but the templates were created differently. When we searched the claim on the internet, we found that the claim also went viral on social media in 2017 and 2020.

To verify further, we checked the Facebook and Twitter pages of WHO but found no similar announcements there.

We also got in touch with Shamila Sharma, Communications Officer at World Health Organization South-East Asia Region, who clarified that the circulating information is “fake”.

To understand the causes of brain stroke, Vishvas News contacted experts who discarded the claims made in the infographic and issued certain clarifications for the readers:

A. Dr Rajeev Jayadevan, co-chairman of the Indian Medical Association’s COVID-19 National Task Force, said, “None of the claims in the infographic can directly trigger a stroke. This is a fake message.” He also detailed the correct information on all claims:

While scanning the Facebook user’s profile, we mainly found no information that could be verified.

Conclusion: The infographic claiming WHO issued 7 brain-damaging habits is falsely attributed to the organisation. Some of the habits listed may have other adverse effects on health, but no direct impact on brain damage has been reported yet.