Fact Check: A drowned person cannot be revived if covered in salt, viral claim is fake

The post claiming that a drowned person who is recovered within 3-4 hours can be revived if covered in salt is fake. There is neither any scientific proof of this nor any such case has come to the fore. There was no response on the phone numbers given in the post. 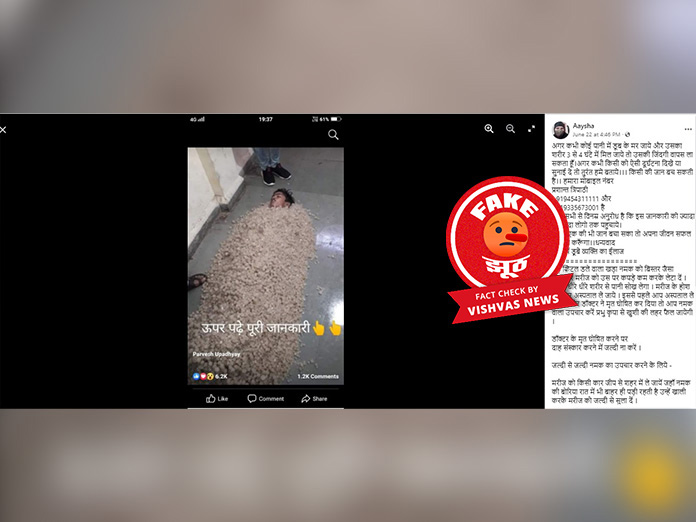 New Delhi (Vishvas News): A photo is going viral on social media showing a boy covered in a heap of salt. The post claims that a drowned person who is recovered within 3-4 hours can be revived if he is covered in salt. Vishvas News investigated the claim and found that the viral post as fake. There is no scientific evidence till date, which can prove this is true, nor has any such thing been done yet.

While sharing the photo on June 22, Facebook user Aaysha (archive link) wrote (Translated Version), If ever someone dies by drowning in water and his body is found in 3 to 4 hours, then I can bring his life back. If anyone ever sees or hears such an accident, then tell us immediately… Someone’s life can be saved. our mobile number
Prashant Tripathi
+919454311111
+919335673001

It is a humble request to all of you to spread this information to as many people as possible. If I can save the life of any one, I will feel successful in my life.Thank you..

If someone dies due to drowning and the body is found within 3-4 hours, remove the clothes of the deceased and cover the body in 1.5 quintal of salt. The salt will slowly drain the water out of the body. Once the person gets conscious, take him to a doctor.

If you have taken someone who has drowned to a hospital and the doctors have declared him dead, proceed with the salt treatment.

By God’s grace, everything will be alright. Do not hurry to cremate once the doctor has declared the patient dead.”

Please forward the message, it may be useful to save someone’s life.

We started searching on Google through several keywords. We found reports mentioning families of people who fell for such superstitious beliefs but couldn’t revive the deceased. On August 20, 2019, a news website News18 reported an incident in which a family tried out this salt treatment to revive the deceased but nothing positive happened.

According to the report, two brothers died by drowning in the pond in Sanwer’s Chittanda village. The doctors of the government hospital declared him dead. Due to the viral message on social media, villagers buried both the bodies in a heap of two quintals of salt. By this process both were not alive, but the dead bodies got spoiled due to salt. Same incident happened in Bhilwara too, a teenager died due to drowning in the river. After being declared dead, the relatives kept his body buried in salt for five hours. But he did not survive, so they buried him. A similar case has come to the fore in Jalgaon, Maharashtra.

For more information, we talked to Khatauli block in-charge medical officer Dr. Avnish Kumar Singh. He says, ‘This is a pure rumor. There is also no scientific evidence that a person who died by drowning through salt is alive again. Yes, if he is breathing then he can be saved through CPR or artificial respiration.”

Conclusion: The post claiming that a drowned person who is recovered within 3-4 hours can be revived if covered in salt is fake. There is neither any scientific proof of this nor any such case has come to the fore. There was no response on the phone numbers given in the post.