Fact Check: A shaligram was not taken out at Jagannath Puri Temple, viral claim is false 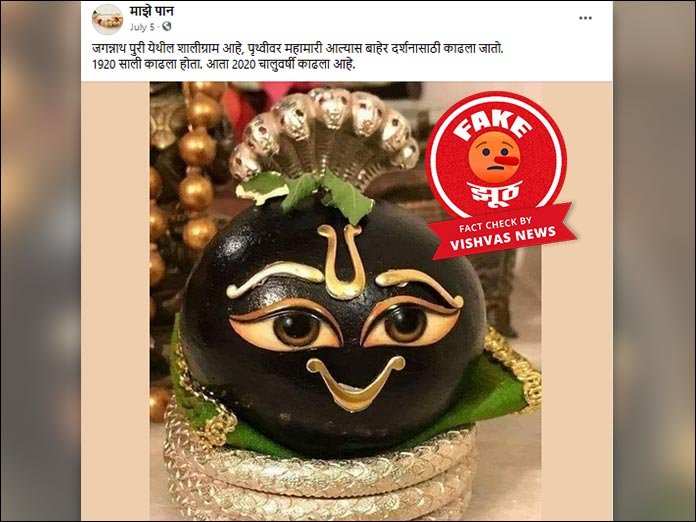 New Delhi (Vishvas News): Vishvas News came across a viral claim being shared on various social media websites, including WhatsApp which stated that A shaligram in Jagannath Puri Temple has been taken out. This is taken out during a pandemic on Earth. Last time, it was taken out in the year 2020. Its sight is very rare. Vishvas News in its investigation found the claim to be fake.

Similarly, we also found a video being shared under the same claim.

The video was shared by Facebook page, ‘MAA Vighneshwari – Kotavad’, the claim was same as above.

Vishvas News started its investigation with a simple keyword search on the search engine. We found a news on the New Indian Express website. The news titled, “Puri temple deity comes out to ward off disease” did not have a mention of Shaligram anywhere in the report. The news was uploaded on the website on 30th March 2020. Check the complete report here.

Another claim in the viral post mentions that last time it was taken out in the year 1920, however there was pandemic in the year 1920. According to the Centers for Disease Control and Prevention, “The 1918 H1N1 flu pandemic, sometimes referred to as the “Spanish flu,” killed an estimated 50 million people worldwide, including an estimated 675,000 people in the United States. An unusual characteristic of this virus was the high death rate it caused among healthy adults 15 to 34 years of age.”

At the end of the investigation we contacted the priest of Jagannath Puri Temple in Odisha. Vishwabasu Binayakdas Mahapatra while interacting with Vishvas News said, “The picture and video has been going viral for many days. The claim being circulated along with the picture and video is fake. During an epidemic or a pandemic, a shaligram is not taken out in the Jagannath temple. It is Lord Nrusingha that is taken out during the pandemic.”

Finally, Vishvas News conducted a social scanning of the Facebook page that had shared the image, the page माझे पान posted the image on July 5, till now the image has 4.6K likes. 1,056,847 people like this page.

Conclusion: A shaligram was not taken out at Jagannath Puri temple during the pandemic, viral claims on the social media are false.