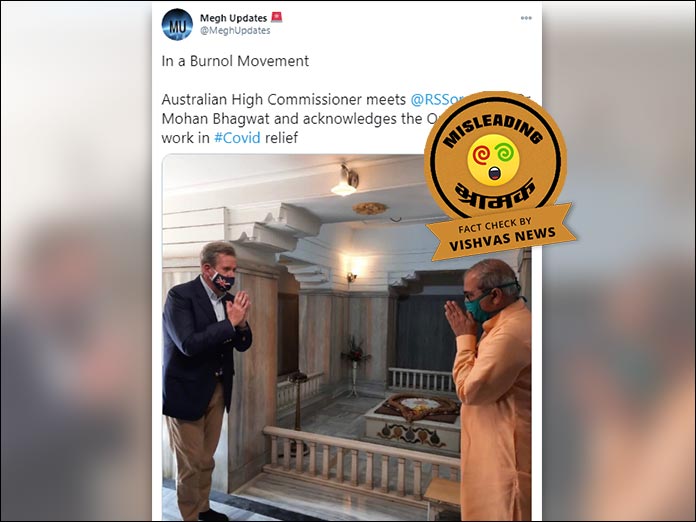 The report had used the tweets shared by the Australian High Commissioner to India and that is where we found the viral image.
It was one of the four images shared on the official Twitter account of Barry O’Farrell.

On closely observing the pictures we found that the person in the three pictures shared by Barry O’Farrell is indeed RSS chief Dr Mohan Bhagwat. However, the person in the fourth picture does not appear to be Dr Mohan Bhagwat.
We checked the pictures again and then searched for the pictures of RSS Headquarters on the internet. We found that there are two buildings attributed to RSS in Nagpur, one in Mahal, Nagpur which is the headquarter and another in Reshimbag which is Hedgewar Smruti Mandir.

We knew through reports that the Australian high commissioner had visited the Mahal karyalaya to meet Dr Mohan Bhagwat and hence we called up officials in Smruti Mandir.
Vishvas News came to know that the person in the picture along with Australian High Commissioner to India, Barry O’Farrell is vyavastha pramukh, Hedgewar Smarak Samiti, Vikas Telang. Talking to Vishvas News, Vikas Telang said, “The person with him in the viral picture with
Barry O’Farrell is not Dr Mohan Bhagwat, but me. However, one can easily see Mohan ji in other pictures.”
We did social scanning of the profile that had shared the picture, the account Megh Updates was created in the year 2019. It has 48.8K followers.

Conclusion: One viral picture of Australian High Commissioner to India Barry O’ Farrell during his visit to meet RSS supremo Dr Mohan Bhagwat is misleading. He did meet Mohan Bhagwat, but there is one picture where he is seen standing with vyavastha pramukh, Hedgewar Smarak Samiti, Vikas Telang.