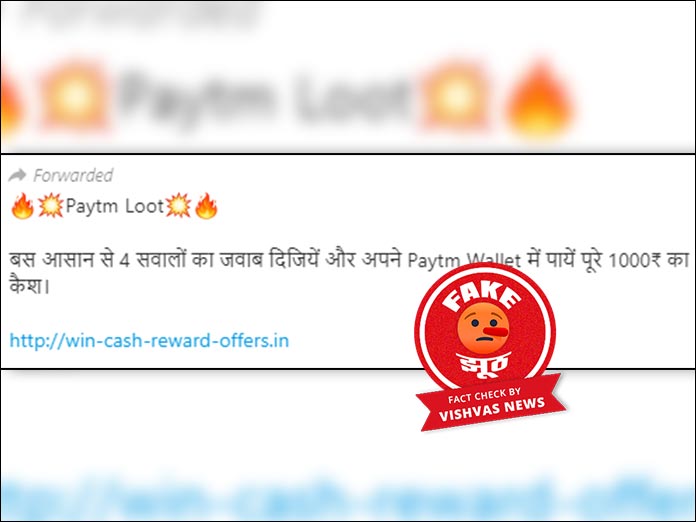 New Delhi (Vishvas News): Vishvas News received a message on Whatsapp claiming that Paytm is offering Rs1000 cash by answering 4 questions in the link provided in the message. Vishvas News investigated and found the viral post to be fake.

The domain name mentioned in the website started with http://. It should be noted that an HTTP website isn’t secure. The ‘S’ in https:// stands for secure and indicates that the website uses encryption to transfer data. In this case, the viral website promising Rs 1000 didn’t use an ‘S after HTTP.

Vishvas News contacted Paytm Customer care, an official named Ayush stated that: “The official website of Paytm is Patym.com. This message offering Rs1000 cash by clicking on a link as shared in the message is fake. We request not to fall prey to any such fake message.”

We also saw that the same message is viral across social media platforms with different links directing to websites. The other link used was http://paytm.quiz-reward-offers.in/.

Though some of the links have already been taken down while some in the viral messages prompt the users to answer 4 simple questions and share the link with ten of their friends on WhatsApp further prompting to download an app from the playstore. There are chances that the same process may be used to trick users into downloading a harmful or potentially dangerous app on their device.

This is not the first time a message is viral in the name of Paytm. Earlier in January 2020, Vishvas News debunked a post which was a message received by Paytm users warning them that their KYC has been suspended and that they have to call a number to reactivate it, else the account will be blocked within 24 hours. Vishvas News investigated and found that the viral message is fake and it is a phishing scam.

A quiz on a random website offering Rs 1000 Paytm cash is a scam. Do not fall for it!