Viral claim fake. BJP president Bandi Sanjay did not write a letter to the Election Commission. He himself confirmed this. 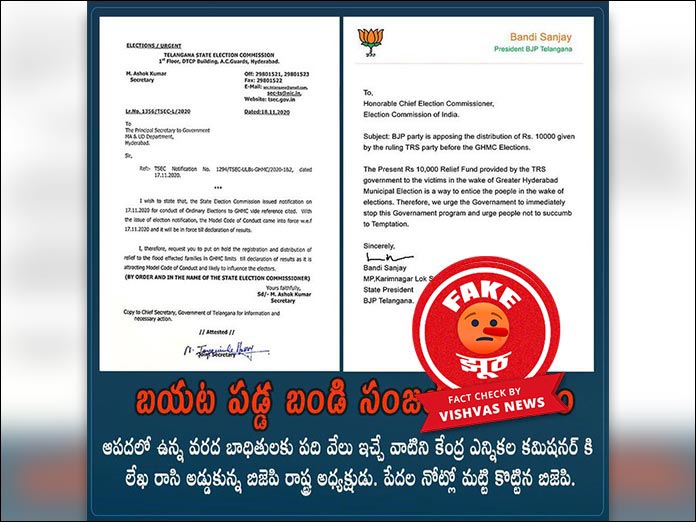 Hyderabad (Vishvas News). A letter allegedly from Telangana BJP president Bandi Sanjay addressed to the Election Commission to stop the government’s assistance to flood victims is viral on social media.

Vishvas News investigation revealed the letter is fake. Sanjay had denied the claim.

Claim
Picture of letters allegedly by Bandi Sanjay addressed to the Central Election Commissioner to stop disbursement of Rs 10,000 to flood victims in distress is viral on social media. Several users have shared this post expressing disappointment.

If you look at the two letters in the viral post, there is a orders given by the Telangana State Election Commission to stop the flood relief, and next to it is a letter written under the name of Bandi Sanjay.

Hyderabad has been hit by floods recently. The damage was severe. With this, the government has announced that it will provide flood relief at the ten thousand rupees to the victims. Flood relief distribution continues. However, it was during this time that the notification for the Greater Hyderabad Municipal Corporation elections was issued. Polling will be held on December 1. The Election Commission has issued orders to stop the distribution of flood relief that could affect voters. With this, many people shared this photo virally on social media with a similar claim.

Investigation
We observed the letters and identified many errors. We noticed that it did not have a dateline like any other formal letter. The letter addressed to the Central Election Commission stirred doubts as GHMC elections are entirely within the purview of the State Election Commission and also we identified that Bandi Sanjay’s designation has no mention about his current designation as Karimnagar MP.

We searched on the Internet using keywords and found many users have raised doubts on the authenticity of the letters.

We found that BJP president Bandi Sanjay had lodged a complaint with the cyber crime police about the viral letter circulating on social media. A copy of the complaint was also sent to the Telangana DGP and the Union Home Minister. A copy of that complaint can be found below.

Vishvas News contacted BJP Telangana president Bandi Sanjay to verify the claim. He said he had not written any such letter and had also filed a complaint to the police on this issue.

Conclusion: Viral claim fake. BJP president Bandi Sanjay did not write a letter to the Election Commission. He himself confirmed this.