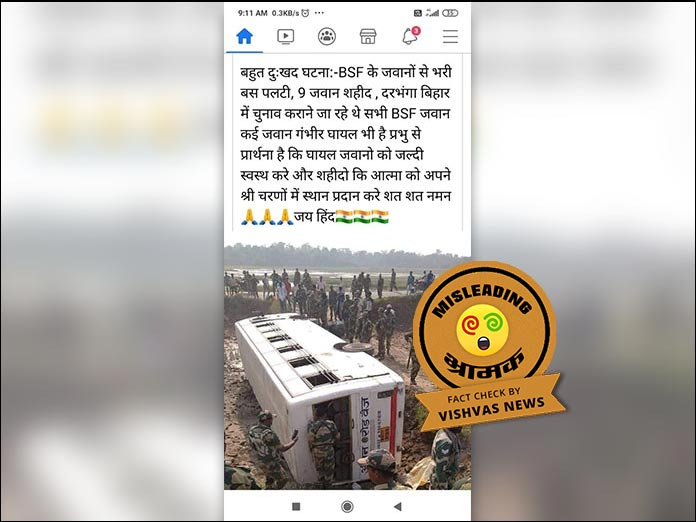 New Delhi (Vishvas News): Vishvas News received a post related to a bus accident in Bihar for fact check on its WhatsApp chatbot (+91 95992 99372). It was being claimed in the post that nine soldiers had been killed in an accident after a bus carrying the Border Security Force (BSF) soldiers met with an accident. According to the claim, these soldiers were on their way to the elections. Vishvas News in its investigation, found the claim to be misleading. The bus carrying BSF soldiers did meet with an accident in Bihar’s Darbhanga, however no soldier was killed in the accident.

Claim:
The post that Vishvas News received on its chatbot is also being widely shared on other social media platforms. After searching using various keywords we found the claim being shared on Twitter too.

Translation: Very sad, a bus carrying BSF soldiers met with an accident in Bihar’s Darbhanga, where nine soldiers were martyred and many were wounded, they were on the way to Bihar elections. The accident took place in the jurisdiction of Katra police station. May all the departed souls rest in peace.

Check the entire tweet and its archive version here.

Investigation:
Vishvas News in the beginning started its investigation by searching the claim using appropriate keywords on the internet. We found a report by a News Agency UNI posted on 4 November. In this report it was mentioned that in the accident 10 people had been injured which included 9 BSF soldiers. However, there are no reports of any soldiers being killed in this accident. According to the report the bus tumbled near a pothole on Singhwara Barikothi Road.

We also searched the image of the bus in the viral post using Google Reverse Image Search. We found numerous results related to this particular image. Meanwhile, we reached the website of Sanmarg live and checked its photo gallery section. In this photo gallery the viral image was used along with a report and information about the accident too was given.

During the investigation we found a report published in Dainik Jagran on 5th November 2020. This was a detailed report about the Bihar bus accident. According to the report, the injured soldiers were taken to PHC Hospital in Sighwara. According to Dr Premchand Prasad the medical incharge, it was mentioned by him that the condition of the injured was stable.

Vishvas News in its investigation did not find any authentic media reports regarding the death of BSF soldiers. We contacted Katara Police of Muzaffarpur in this regard. He told us that the incident is old and that no BSF soldier was killed in the accident. All the soldiers were discharged after the treatment.

Vishvas News also interacted with the Darbhanga Bureau chief of Dainik Jagran, Sanjay Upadhyay. He told us that the bus carrying BSF soldiers did meet with an accident, but no soldier was killed in the accident.

Vishvas News also did a social scanning of the Twitter profile that shared the claim. This Twitter handle was made in August 2014. According to the information given on the profile, the user is a resident of Surat, during the fact check the user had 67 followers.

Conclusion: During the Bihar elections, a bus carrying the BSF soldiers did meet with an accident at the Darbhanga Muzaffarpur border, but no soldier was killed. Viral claim is misleading.