Viral post is misleading. Rahul Gandhi was not referring to the physical infrastructure of India, but about the alleged control of political parties on institutions. 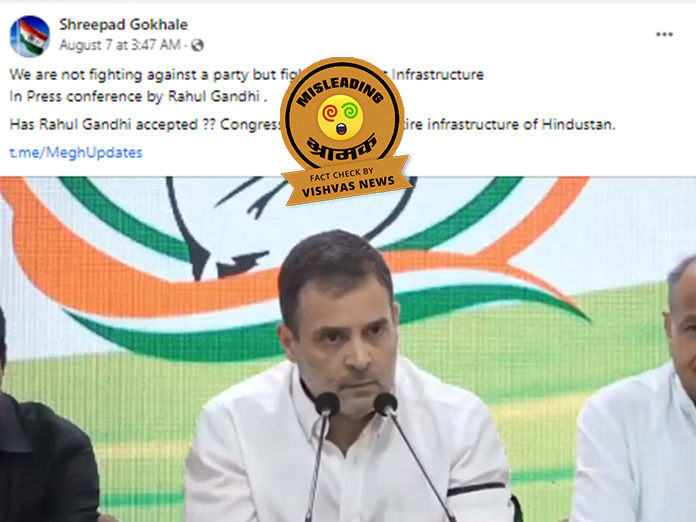 New Delhi (Vishvas News). A small part of Rahul Gandhi’s speech is going viral on social media, where he can be heard saying that his fight is not against a political party but against the infrastructure of India. In the investigation of Vishvas News, this claim turned out to be misleading. The part of Rahul Gandhi’s speech which is going viral is not complete. On listening to the entire speech, it can be understood that he was not talking about India’s infrastructure. He was saying that “all the big institutions in India have RSS people and their party is against it.” He referred to the people at the institutions as the infrastructure.

Sharing the viral video (archive link), Facebook user ‘Shreepad Gokhale’ wrote, “WE ARE FIGHTING AGAINST THE ENTIRE INFRASTRUCTURE OF INDIA” THIS IS EXACTLY WHY PEOPLE CALL RAHUL GANDHI ‘PAAPPY’!”

In the 16-second viral video, Rahul Gandhi can be heard saying, “We are not fighting a single political party, we are fighting against the entire infrastructure of India.”

We did a Google reverse image search of the keyframes of the video. During the search, we came to know that this clip is a part of a Congress press conference held on 5 August 2022. In the search we found the complete video of this event on the verified YouTube channel of Indian National Congress. In the video of this 30-minute press conference, after 12 minutes, in response to a question, Rahul Gandhi says, “translated: In a democracy, when the opposition fights, it fights on the strength of the institutions. The opposition stands on the strength of what is the legal, judicial structure of the country, which is the electoral structure of the country, which is the media of the country. All those institutions are giving full support to the government because the government has placed its people in the institutions. Not every institution in India is free today. Today every institution in India is under the control of RSS. One RSS person is sitting in every institution. So we are not fighting a political party. We are fighting against the entire infrastructure of India. When we had our government, infrastructure was neutral. We did not control the infrastructure. There was a fight between two political parties, three parties. Today the entire infrastructure of the government is with one party.”

On listening to this entire speech, it is understood that Rahul Gandhi was not talking about the physical infrastructure of the country, but about people controlling the institutions.

We also got news on this press conference on Dainik Jagran’s website.

We spoke to Manish Negi, Chief Sub Editor, who wrote this news for Dainik Jagran Online, about this. He confirmed, “Rahul Gandhi was not talking about India’s physical infrastructure or development infrastructure in this press conference, but was talking about people allegedly belonging to a particular party in large institutions. The viral claim is misleading. “

We also contacted Congress leader Sanjeev Singh in this regard. He also called this clip incomplete and said that the claim being made in this post is false.

The user who shared the viral video with a misleading claim is followed by more than 13 thousand people on Facebook.

Conclusion: Viral post is misleading. Rahul Gandhi was not referring to the physical infrastructure of India, but about the alleged control of political parties on institutions.