Vishvas News in its investigation found that the viral image stating CNN praised Taliban for wearing masks is fake. The image and article was published on a satire website. 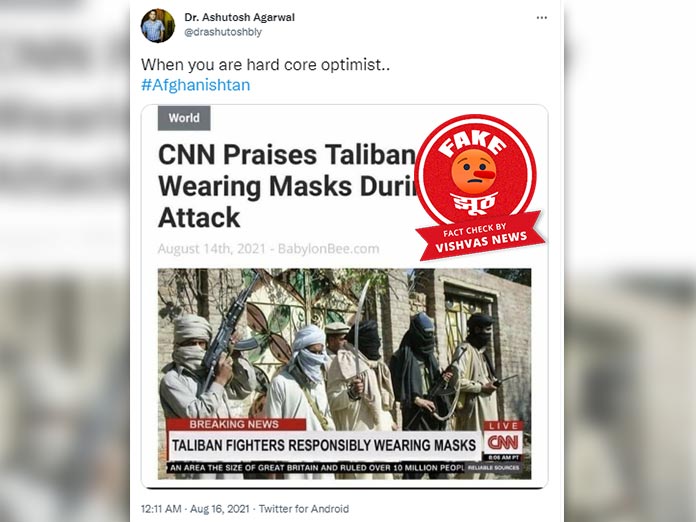 New Delhi (Vishvas News): Vishvas News noticed an image going viral over the internet. The image looked like a news plate from the leading channel CNN. The headline said: CNN Praises Taliban for Wearing Masks During Attack.
Below the image, it had been written, Breaking News
Taliban Fighters Responsibly Wearing Masks. On the right side of the image logo of CNN was clearly visible.
Vishvas News in its fact check found out that the image being widely circulated is fake and that CNN did not share any such news.

The image was also shared by Indian celebrities and leaders.

Investigation:
Vishvas News had noticed that the image was being widely shared over various platforms.

Vishvas News first observed the image carefully. The image had written over it, August 14th, 2021 – BabylonBee.com

We found this article being shared on the Twitter page of The Babylon Bee.

We checked the about us section of the website. The section said:
The Babylon Bee is the world’s best satire site, totally inerrant in all its truth claims. We write satire about Christian stuff, political stuff, and everyday life.

It was hence clear that the news was a satire.
Vishvas News then contacted The Babylon Bee through their Contact Us section. The Babylon Bee responded and said that they are a satire publication and that all their articles are satire and not real news.

Vishvas News then did a social background check of the Twitter user that shared the image, Dr Ashutosh Agarwal is a Dentist and and follows 1,737 people while, 462 people follow him.

Conclusion: Vishvas News in its investigation found that the viral image stating CNN praised Taliban for wearing masks is fake. The image and article was published on a satire website.