In the investigation by Vishvas News, the viral image shared in the name of Nita Ambani was found to be false. The image of Deepika Mondol was edited and shared with false claims. 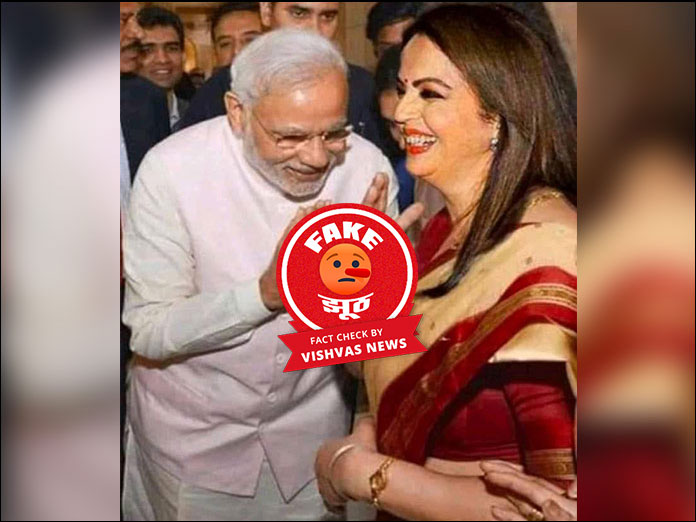 Vishvas News (New Delhi): Once again an edited picture is being circulated widely on Facebook. In this picture one can see Prime Minister Narendra Modi bowing with hands folded in Namaste in front of Nita Ambani. In the investigation of Vishvas News it was found that Deepika Mondol’s image who runs a non-governmental organisation was edited to look like that of Nita Ambani.

In investigation of Vishvas News, viral post was found to be fake. Earlier too, her picture was cropped and appeared to look like that of wife of businessman Gautam Adani. Vishvas News earlier too had investigated it. You can read the entire news here.

Investigation:
Vishvas News in the very beginning to know the truth about the viral picture contacted the spokesperson of Reliance insdustries. He informed that earlier too this image was widely shared online. The woman in the picture is not Nita Ambani.

Now we went ahead to check as to who the woman in viral image was. We took help of online tools. We found the oiginal picture on a website with the use of Google Reverse Image search. In the news published on VTV Gujarati it was informed that the woman in the image was Deepika Mondol. It is an image from the event held in 2015. Read the entire news here.

During the investigation we found the image and complete information on a website named OneIndia too. In this news it was told that Deepika Mondol runs an NGO. Read the entire news here.

In the last step of investigation we did a background check on the user who shared the fake post. We came to know that user Krishna Malviya is a resident of Bhopal in Madhya Pradesh.

Conclusion: In the investigation by Vishvas News, the viral image shared in the name of Nita Ambani was found to be false. The image of Deepika Mondol was edited and shared with false claims.