Fact Check: Disturbing Video of Woman Hacked to Death In Brazil Passed off As Killing In India

No, this disturbing video of woman hacked to death is not from India. It is from Brazil. 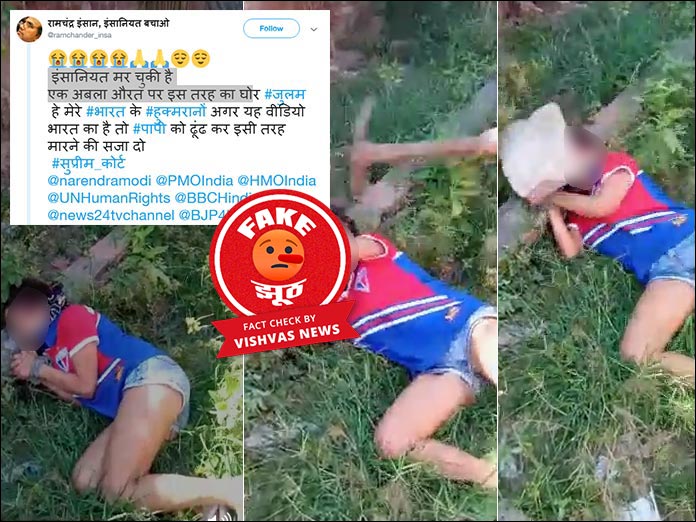 New Delhi (Vishvas News): A disturbing video of a woman being brutally hit with a pickaxe on her head is going viral on social media. As per the claim in the claim, the video is from India. When Vishvas News investigated the post, we found that the video is from Brazil and is peddled as India.

Vishvas News also received the post on its Whatsapp Chatbot where the user claimed that the video is from Assam, India.

The gruesome video of a woman hacked to death is going viral on social media with a claim that it is from India. In a 31-second long clip, a woman was being hit on her head by a masked assailant. The hands of the woman are tied and her mouth gagged. We also received the video on our Whatsapp Chatbot where the user claimed it to be from Assam, India.

Vishvas News has chosen not to show the video and have blurred the screenshots because of its disturbing nature.

Logo seen in the viral video:

We performed a keyword search and found a blog that showed an image of a woman in the same jersey lying on the ground and was identified as a 23-year-old woman named Thalia Torres de Souza.

When we searched reports on google by the name Thalia Torres de Souza, we found a report dated September 1, 2020. As per the report, one of the cruelest crimes in Ceará, state in Brazil was the victim of a 23-year-old girl, identified as Thália Torres de Souza, who was kidnapped by members of a criminal faction in the Bom Jardim neighborhood and taken to the neighboring neighborhood, Granja Portugal.

As per the article, “Thália was tied up with ropes, gagged and carried by force, at gunpoint, to the margins of the Maranguapinho River, close to Rua Coronel Fabriciano, and executed there cruelly. The brutal murder was filmed by the criminals and shows when the girl is hit with an ax and stones on the head, with no chance of defense. The corpse was found hours later, with his head smashed and his hands tied. The girl, until then unidentified, wore blue denim shorts and the shirt of her favorite team, Fortaleza Esporte Clube.”

The clothes as mentioned in the article matched with the woman in the viral video.

We found a photo on the page named Feminicídio – Parem de nos matar that showed which posts on femicides had posted about her murder case on September 1, 2020.

Since the video is also viral claiming it to be from Assam, India, Vishvas News contacted Shri Hemanta Kr. Das, D.C.P. Admn. Guwahati, Assam. He said: “No such incident found reported from any corner of Assam.”

The video is also shared on Twitter by a user named Jaggu दादा. When we scanned the profile of the user we found that the user has 1202 followers till today.

Conclusion: No, this disturbing video of woman hacked to death is not from India. It is from Brazil.