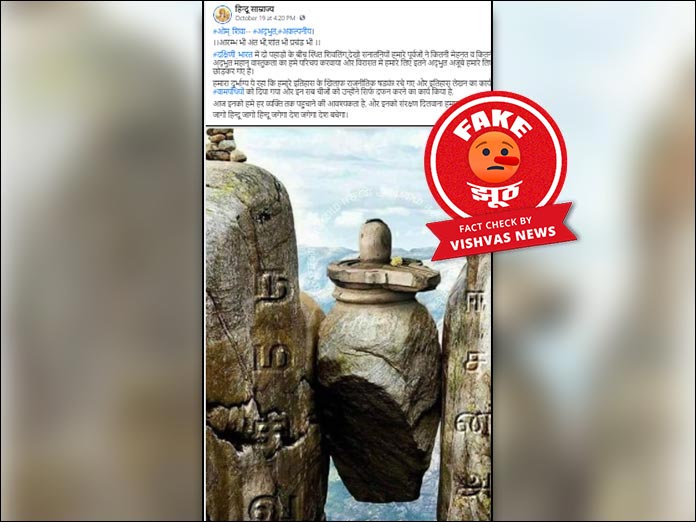 In the post, the Shivling is claimed to be in South India. With the help of keywords, we searched for the famous Shivling in South India. We found that there are many well-known Shiva temples throughout South India. Even 2 of the 12 Jyotirlingas are located in Tamil Nadu and Andhra Pradesh in South India. But none of these is similar to the one shown in the viral image.

We contacted Raja Ram Pant, Chief Administration Manager, Rameswaram Temple, Tamil Nadu regarding the viral post. He said, “This picture is not of the Rameswaram temple. To my knowledge, there is no such Shivling in Tamil Nadu. ” He also gave us the number of Swami Narayan, the director of Mallikarjuna temple in Andhra Pradesh. Swami Narayan confirmed while talking to us over the phone, “This Shivling does not look real. I have not seen any such Shivling in India. “

After this, we took a screenshot of the viral picture and searched it using Google reverse image search tool. We found the exact same picture on amongraf.ro. But there was no Shivling in the picture. According to the report, this photo is of the Magic Hanging Stone in kjerag, Norway.

We further searched with the keywords “MAJESTIC HANGING STONE, KJERAG, NORWAY”. We found many photos of this hanging stone, which showed that the viral photo was edited. The real picture is of the Hanging Stone located in the Kjerag mountain range of Norway, above which the Shivalinga has been pasted with the help of editing tools, and had gone viral with the wrong claim.

The post is shared on the Facebook page ‘Hindu Empire’. We scanned the page and found that it has 1577 followers.

Conclusion: In Vishvas News investigation we found that the claim to be false. The viral photo is edited. This Shivling is affixed with the help of editing tools in between two rocks located in Norway.