Vishvas News in its investigation found that the viral image of Supriya Sule sitting in Maha CM is edited. Viral claim is false. 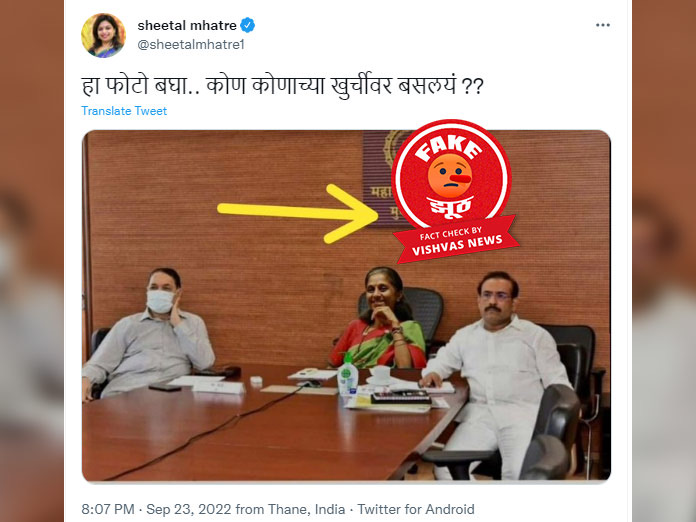 New Delhi (Vishvas News): Amidst the ongoing war of words between the MVA and the current Shiv-Sena BJP government in Maharashtra, Vishvas News came across a viral picture of the NCP leader Supriya Sule on social media where she can be seen sitting on the Maha CM chair during a meeting. Vishvas News, however, in its investigation found that the image is edited.

Translation: See this picture, who’s sitting on whose chair?

We started the investigation by checking the comments on the post. Many had called out Sheetal Mhatre for sharing the edited picture.

We first searched for the image of Supriya Sule used in the picture, with a combination of Google Reverse Image Search and Google Lens. We found the image used on the profile picture of a page, ‘Hon. Supriya Tai Sule Fan Club‘.

It also had the original image.

This picture was also shared as a profile picture on her verified account.

This picture clearly looked from an event and not from a meeting.

The original picture as shared by Aditi Nalawde were from Covid meeting conducted by PM Narendra Modi through video conferencing.

In the next step of investigation, Vishvas News contacted Jagdish Panchabhute an NCP leader, who informed us that the viral image is edited. He said, “The war of pictures on social media began when Ravikant Varpe, state spokesperson of NCP shared the image of Eknath Shinde’s son sitting on the Maha CM chair in his absence. To counter the narrative, Sheetal Mhatre shared the morphed image.”

In the last step of investigation, Vishvas News did a background check on the Sheetal Mhatre is Ex. MCGM corporator and Shiv Sena spokesperson who went into the Shinde camp.

Conclusion: Vishvas News in its investigation found that the viral image of Supriya Sule sitting in Maha CM is edited. Viral claim is false.