Fact Check: Eknath Shinde was not drunk at airport, viral claim is false 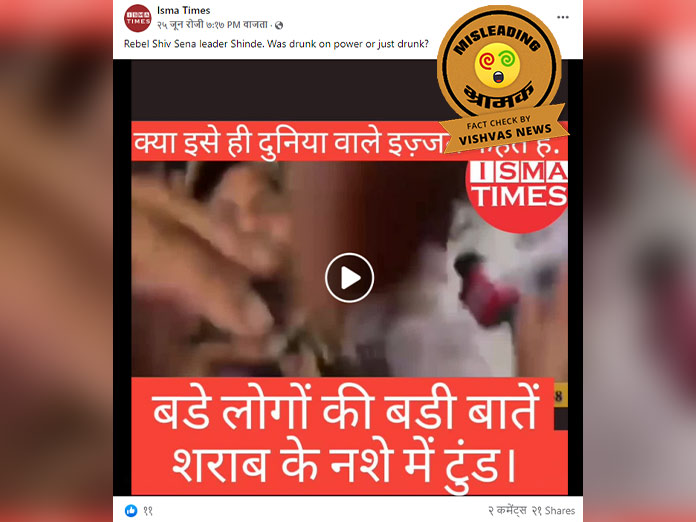 Vishvas News (New Delhi): Vishvas News came across a post on social media platforms which claimed that newly sworn-in CM of Maharashtra, Eknath Shinde was drunk at the airport. In the viral video Eknath Shinde could be seen surrounded by news reporters and appears in the state of intoxication. Vishvas News in its investigation found the viral claim to be misleading.

We also found the video being shared on Twitter.

Investigation:
Vishvas News started its investigation by looking at the video carefully. The video appeared blur. It also had a logo that said, ‘MH 04’. We hence went ahead checking the page that would have this logo on its videos.

Vishvas News found the page, but did not find the video uploaded over the page.

We then checked the Facebook page of Eknath Shinde and checked the ‘mentions’ section of the same, where one user had posted the complete video of the incident going viral.

The video here too was blur but nowhere in the video Eknath Shinde appeared drunk. We could also see a mobile number mentioned on the video of the editor, Sandeep Labde. Vishvas News called him up.

Sandeep Labde told us, “We had shared the clip, however the claim the Eknath Shinde was drunk is completely baseless. This video was taken when reporters crowded him and asked him questions. He was leaving from Surat for Guwahati and it was a chaos at the airport. Someone cropped the video of just 30 seconds and made it viral with the false claims.“

He also shared the original video with us on WhatsApp, where Eknath Shinde appeared sober.

For more details we reached out to Pramod Sharma of ANI who covered the briefings from Surat airport. He too informed us that Eknath Shinde was not drunk while he addressed the media.

In the last step of investigation, Vishvas News did a background search of the page which shared the viral video. Isma Times is liked by 21,599 people.