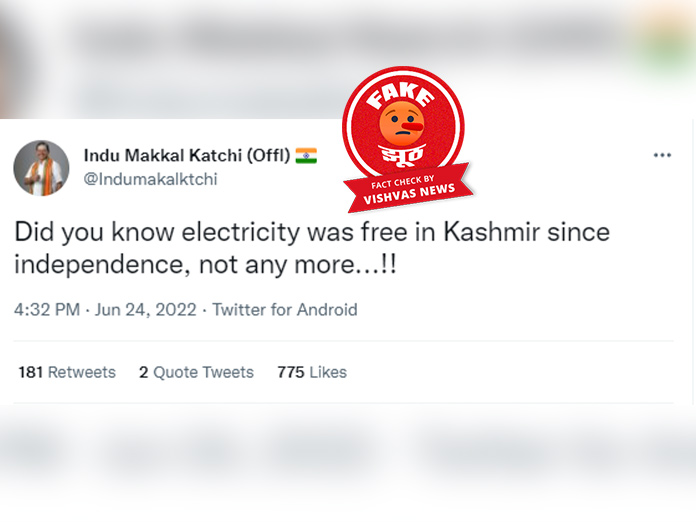 Vishvas News came across a claim being widely shared on Twitter.

Twitter user Indu Makkal Katchi (Offl) shared on Twitter on June 24 and wrote: Did you know electricity was free in Kashmir since independence, not any more…!!

We started investigating the claim by simple keyword search on Google.

We found several reports that were linked to protests against power cuts in Kashmir.

We also found a report where the power contractors threatened to commit suicide due to default on payments.

We also found a report from 2019 that said that Kashmir is passing through worst ever power crisis.

“Power Development in Jammu and Kashmir has a long and distinguished history. 9MW Mohra Hydro-electric Plant, among the first of its kind in the subcontinent, was developed as early as 1905.“

We tried to find out if there were any recent statements on Jammu and Kashmir electricity. We found a report in Goa Chronicle published recently titled: Pay money to get Electricity , no more free electricity now: J&K LG Manoj Sinha tells people

We also found the approved tariff for domestic supply posted on the website of Government of Jammu and Kashmir.

In the last step of investigation we did a social background check of the user who tweeted the claim. Indu Makkal Katchi (Offl) joined Twitter in August 2019, and has 47.8K followers.