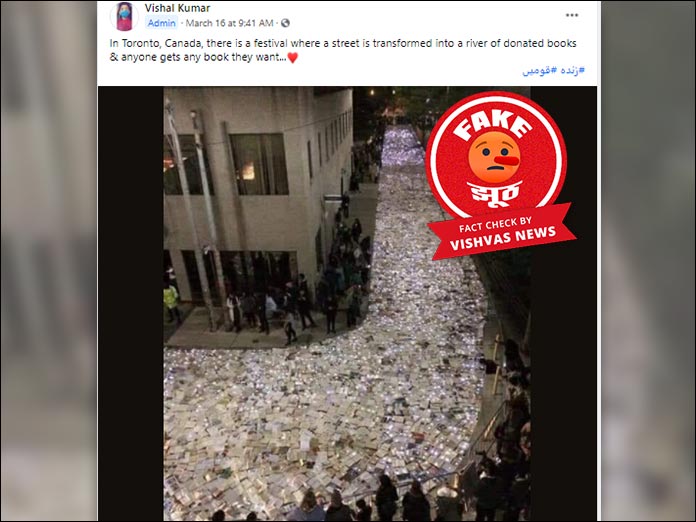 Vishvas News (New Delhi). A pile of books spread on a road can be seen in a post viral on social media. The Post is claimed to have a view of Toronto in Canada where there is a Book Donation Festival every year and people donate so many books that the streets are filled.

Vishvas News investigation found the claim to be fake. The scene in the viral post is not of a book donation festival, but of an art installation made during the 2016 Nuit Blanche Art Festival in Toronto.

A user named Vishal Kumar shared this picture and wrote “In Toronto, Canada, there is a festival where a street is transformed into a river of donated books & anyone gets any book they want …”

Another Facebook page named Thinking Minds also shared the post, and wrote “In Toronto every year is celebrated a festival that transforms a street into a river of donated books. Everyone can select a book and take it”

See archive link of the post here and here.

To investigate this post, we searched this image on Google reverse image. We found this picture in a news published on dailymail.co.uk on 3 November 2016. According to the news ” A street in Toronto was turned into a river of knowledge last month when it was covered in over 10,000 books as part of an annual art festival. Luzinterruptus, a collective of anonymous artists from Spain, executed the stunt for the Nuit Blanche Toronto 2016 festival with the help of 50 volunteers. Using books donated by the Salvation Army, the installation took 12 days in total to put together, with the final result being dubbed Literature vs Traffic.”

Vishvas News contacted Punjabi Jagran’s Canadian correspondent Kamaljeet Butter for confirmation. He said “This photo is of an art installation made during an art festival in Toronto in 2016. There are many book donation camps in Toronto, but there is no news anywhere that the donated books are piled up on a road.”

Social scanning of the profile of the page Thinking Minds, which shared the viral post, revealed that the page has 8,305,101 followers.

Conclusion: Viral post is fake. The scene in the viral post is not of a book donation festival, but of an art installation made during the 2016 Nuit Blanche Art Festival in Toronto.