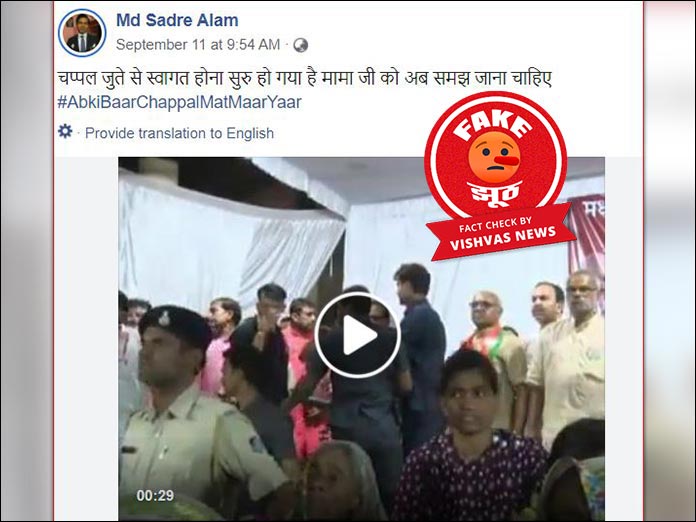 New Delhi (Vishvas News): A video of Madhya Pradesh chief minister, Shivraj Singh Chouhan is going viral, one can see a shoe being thrown over him. It is being claimed that this is a recent incident. Many users are making several claims about this particular video.
Vishvas News in its investigation about the post found that the incident took place in Sidhi, Madhya Pradesh.

Check the archive version of the viral post .
Thinking this video to be recent, other users too are sharing it over various social media platforms.

Investigation:
Vishvas News in the very beginning carefully observed the video. We found Shivraj Singh Chouhan addressing people in the video and no one was wearing a face mask, it was a weird thing to notice amidst the pandemic.
In the next step of investigation we uploaded the video in the InVID tool. We took a few screen grabs from the video and then used Google Reverse Image on the same. During the search we found the video being shared on various websites, which stated that the video is from 2018. During the search we found a news report on a website, ‘One India’. The viral video was used along with the news report. In the report published on 5th September 2018, it was mentioned that the incident of throwing a shoe on chief minister Shivraj Singh Chouhan is from Sidhi. This is from a gathering where he was addressing people in 2018. Read the entire news here.

During the search we found the video on the YouTube channel of Navbharat Times. It was told in the same, that a shoe was thrown towards Madhya Pradesh CM Shivraj Singh Chouhan. The video was uploaded on 3rd September 2018. Watch the entire video here.

Vishvas News interacted with state bureau chief of Nai Dunia, Dhananjay Pratap Singh, he told us that the viral video is from 2018. Back then Shivraj Singh Chouhan was campaigning across the state before the Vidhan Sabha elections. During the same, this incident occurred in Sidhi. This video is now going viral.
In the last stage of the investigation video we checked the Facebook account of the user who shared the video, we found out that the user is from Calcutta. The user had created two Facebook accounts in March 2014. During the investigation of the account we found out that the user is associated with a political party. We found more viral content on this account.

Conclusion: In the investigation by Vishvas News the post was found to be fake. The incident had occurred in the year 2018, the video is now being shared with false claims.