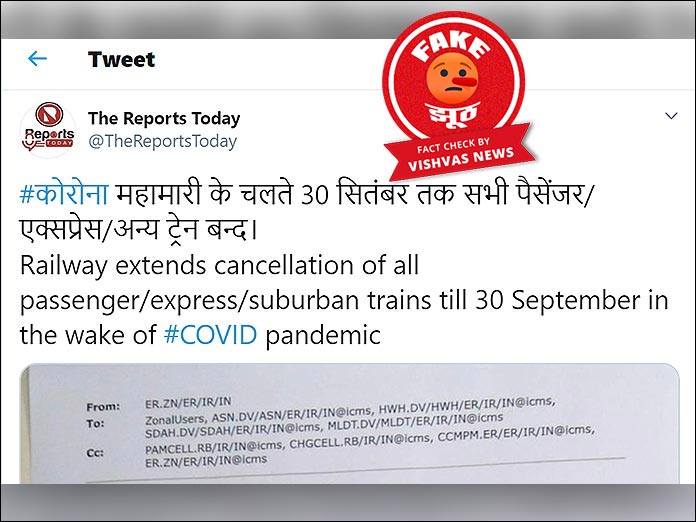 New Delhi (Vishvas News): A post going viral on social media claims that the Indian Railways has cancelled all passenger, express and other trains till September 30th due to coronavirus pandemic. When Vishvas News investigated we found the claim to be false. Indian Railways has clarified that no such new notification has been issued.

The archive version of this tweet can be seen here.

Vishvas News started its investigation by searching the claim on Google using appropriate keywords (30th September, Indian Railways). We found a report on Dainik Jagran’s website. It has been clearly written in the news piece that Indian Railways has stated the news of the cancellation of trains till September 30th as fake.

This news of Dainik Jagran can be read in detail by clicking here.

We further investigated and found a tweet on the official Twitter handle of the Indian Railways. In this tweet, Indian Railways clearly mentioned: Some section of media is reporting that Railways has cancelled all regular trains till 30th September. This is not correct. No new circular has been issued by Ministry of Railways. Special Mail Express trains shall continue to run.

In this regard, Vishvas News spoke to Arunesh Mishra, who is a member of the Railway Passenger Facilitation Committee. He denied the news of the cancellation of all trains by September 30th. Arunesh Mishra said that special trains will continue to run and the remaining trains will remain suspended as before.

The Railway Ministry had given a statement on August 11 that all the special trains will continue running as before. Railways has made it clear that in addition to these, regular passenger trains and suburban trains will remain suspended as before. Special trains can also be extended as per the need.

We scanned the profile of the user ‘TheReportsToday’ who tweeted the fake post. This Twitter profile was created on August 2017. It had 2561 followers until this fact check was done.

The claim of cancelling all trains till September 30 has been proven wrong. Indian Railways has denied this claim by tweeting itself.