Fact Check: Man Being Beaten Up In This video Isn’t A Congress Leader 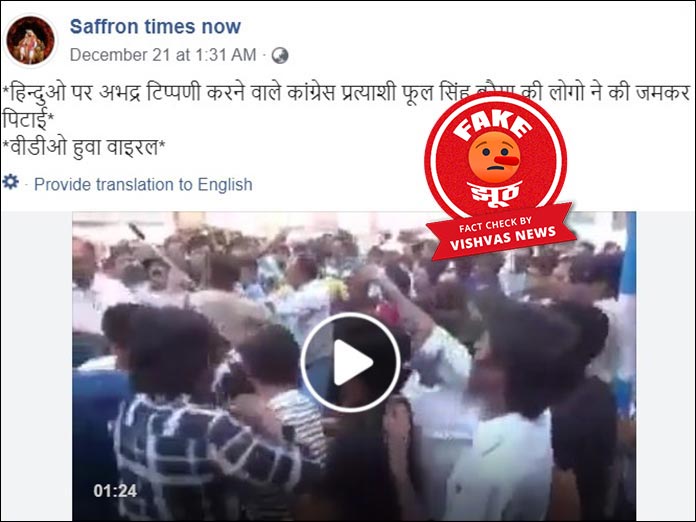 New Delhi (Vishvas News): The video of a man being beaten up is going viral on social media. Some users are claiming that Congress leader Phool Singh was beaten up for speaking against Hindus.

When Vishvas News investigated, we found the post to be fake. An old video of 2016 is now going viral with a fake claim. The leader who was attacked in the video was BJP leader Subrata Mishra.

Facebook user Saffron times now, while uploading a video on December 21, claimed: “Congress candidate Phool Singh Baraiya who made vulgar comments on Hindus was beaten up violently by people!”

Vishvas News used the InVID tool to extract the screengrabs of the viral video. When we searched the screengrabs using Google reverse image tool, we found a video from ANI’s channel on YouTube.

The video uploaded on October 19, 2016, stated that TMC activists attacked West Bengal Minister Babul Supriyo and his convoy in the Asansol district of West Bengal. Apart from this, BJP workers were also attacked. The complete video can be seen here.

We also found a tweet from ANI regarding the video. In a tweet dated 2016, that person can also be seen, who is going viral as from Congress.

We found a report on NDTV which stated that the person being beaten in the video is Subrata Mishra. He is the leader of the BJP. The complete news can be checked here.

Vishvas News contacted Subrata Mishra and he confirmed that he is in the video. In 2016, he was attacked by people from TMC in Asansol.

Vishwas News also spoke to Madhya Pradesh Congress leader Phool Singh Baraiya. He said that it is not him in the viral video. This is a lie being spread in his name.

We scanned the profile of the user who shared the fake post. We found out that more than 1.66 lakh people follow Facebook user Saffron times now. This page was created on June 19, 2020.

Conclusion: When Vishvas News investigated, we found the post to be fake. An old video of 2016 is now going viral with a fake claim. The leader who was attacked in the video was BJP leader Subrata Mishra.