The viral claim about Mohammad Rafi’s song turned out to be misleading. The lines of this song were changed by the censor board. The song was not banned. 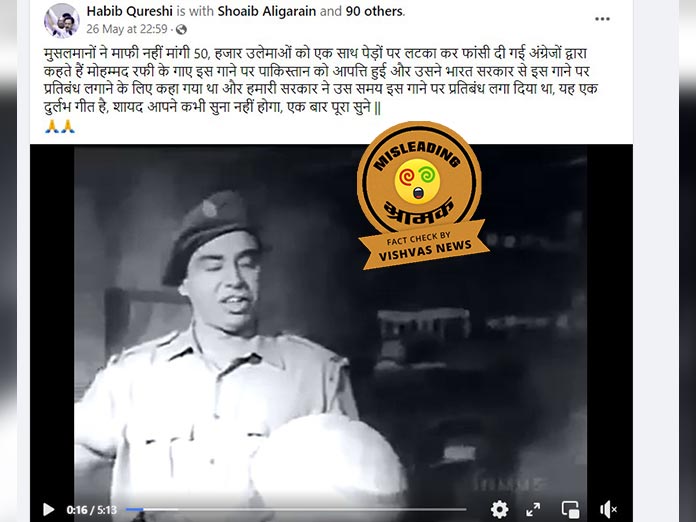 Vishvas News (New Delhi): A video of Mohammed Rafi song ‘Kashmir Hai Bharat Ka, Kashmir Na Denge’ is going viral on social media. It is being claimed that the song was banned years ago because Pakistan objected and asked the Indian government to ban this song. The viral claim turned out to be misleading in the investigation of Vishvas News. This song was not banned. The lines of this song were changed by the censor board.

Facebook user Habib Qureshi (archive) shared the video wrote, “Pakistan objected to this song sung by Mohammad Rafi and asked the Indian government to ban this song and our government had banned this song at that time, it is a rare song, probably you will never hear, listen once.

We searched on Google using several keywords. We found out that the name of the viral song is ‘Jannat Ki Hai Tasveer‘. This song is a part of the film ‘Johar In Kashmir’ released in 1966. The film was based on Kashmir in the late 1940s after the Partition of India.

On the basis of the information received, we again started searching on Google using some other keywords. We found a Gazette of India document from 1966 on the website of the Ministry of Information and Broadcasting. In 1966, the Ministry of Information and Broadcasting issued an order to remove the ‘Haji Pir’ word from this song. The song was released after these modifications. There is no mention of banning this song anywhere in the document. This song of Mohammad Rafi is available on online platforms, it can be heard by searching this.

For more information on the song, Vishvas News contacted S Ramachandran, Senior Film Journalist & Critic. He told us that the viral claim is false. The song was not banned by the censor board. Only a few changes were made to it.

After doing social scanning of user Habib Qureshi who shared the fake claim, we came to know that the user is followed by 189 people. The user is a resident of Bulandshahr, Uttar Pradesh.

Conclusion: The viral claim about Mohammad Rafi’s song turned out to be misleading. The lines of this song were changed by the censor board. The song was not banned.