Vishvas News found in its investigation that this claim is False. This viral billboard of the Aam Aadmi Party has been tampered with. 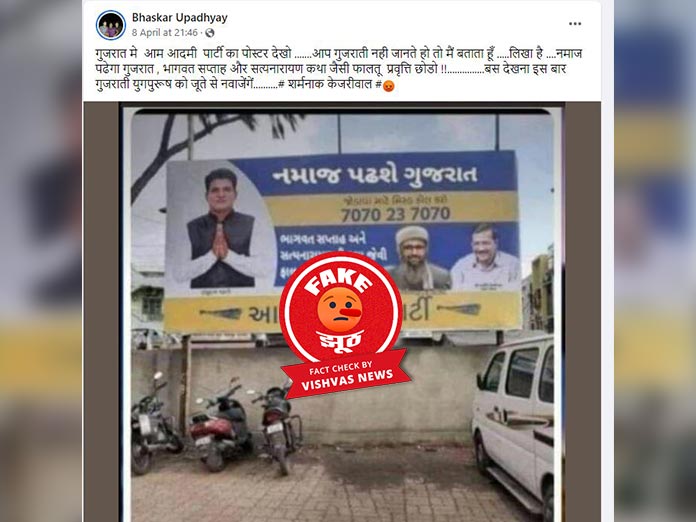 Vishvas News (New Delhi). A picture of an AAP banner’s circulating on social media where it is written in Gujarati language, “Now Gujarat will pay namaz”. It is written on the button of the banner that “people should leave the useless traditions like Bhagwat Saptah and Satyanarayan Katha”. Vishvas News found in its investigation that this claim is False. This viral billboard of the Aam Aadmi Party has been tampered with.

Facebook user  Bhaskar Upadhyay posted the photo of viral banner and wrote, “Look at the poster of Aam Aadmi Party in Gujarat…….If you do not know Gujarati then I will tell…..it is written….Gujarat will read Namaz, leave such nonsense like bhagwat saptah and Satyanarayan Katha !!……….#shameful Kejriwal.”

To know the truth of the viral picture, we searched the photo through Google reverse image. We found the original picture on the Twitter handle of the Aam Aadmi Party Dang district on 10 July 2021. A similar banner can be seen in it. ‘Badlega Gujarat’ is written on the original poster. This part has been replaced with viral text in the viral image.

Comparing the viral photo with the original, we found that the original picture has “Gujarat will change” written on it, which has been edited and changed to “Gujarat will pay namaz”. Also, a line has been added at the bottom about Bhagwat saptah and Satyanarayan Katha. The man who looks Muslim in the viral picture is Gopal Italia, President of Gujarat Aam Aadmi Party. Whose picture has been edited.

For more information, we contacted Ishudan Gadhvi’s PA Vanraj Chavda. He told us that “the viral claim is false. This picture has been viral on social media for a long time. Last year this picture became quite viral. During that time we had lodged an FIR against it.”

Next, we scanned the profile of the social media user who shared the viral post. The user is followed by more than three hundred people on Facebook. User has been active on Facebook since October 2011.

Conclusion: Vishvas News found in its investigation that this claim is False. This viral billboard of the Aam Aadmi Party has been tampered with.