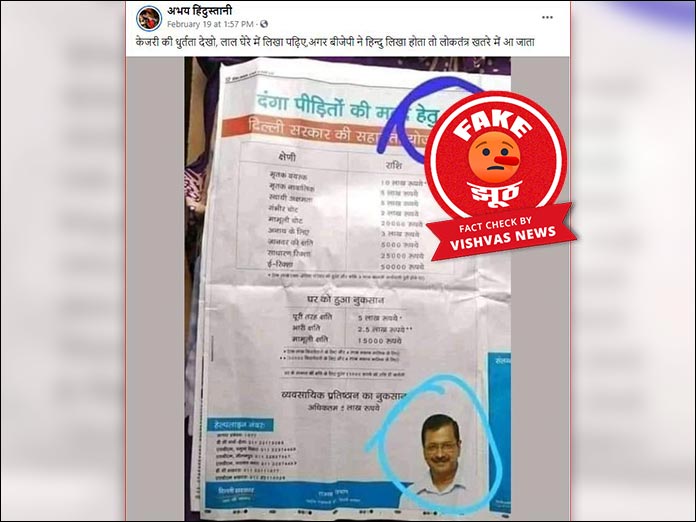 New Delhi (Vishvas News). An advertisement of the Delhi government is going viral on social media. It is being claimed that the Kejriwal government of Delhi has announced compensation only to the Muslim riot victims.

Vishvas News investigated the viral post. We found that a Delhi government advertisement, published in Dainik Jagran on February 29, 2020, was edited and the Muslim word was added separately. The edited advertisement has gone viral earlier as well.

On February 19, Facebook user Abhay Hindustani shared an advertisement: “Look at Kejriwal’s bluntness, read, it is written in the red circle, if BJP had written Hindu then democracy would have been in danger.”

The advertisement mentions the Delhi government’s scheme of helping the riot victims. The plan was reportedly described as for Muslims only.

Vishvas News scanned the advertisement used in the viral post. We used magnifying tool of InVID and could see Dainik Jagran, New Delhi written on it with the date February 29, 2020, on the left.

We searched the publication on Dainik Jagran’s e-paper archives. We found the original advertisement dated February 29, 2020. There was no mention of Muslim word in the advertisement. This was clear that the viral advertisement is edited.

We search Google using appropriate keywords. On the website of Dainik Jagran, we found a report dated February 27, 2020. It has been reported that Chief Minister Arvind Kejriwal has announced a grant of Rs 10 lakh to the families of those killed in Delhi violence. Read the full news here.

Vishvas News contacted Atishi, MLA, Aam Aadmi Party on February 24 and shared the viral post with him. He told that it is completely fake and there is no truth in this.

We scanned the profile of the Facebook user Abhay Hindustani who shared the viral post. We found that the user is based out of Uttar Pradesh.

Conclusion: Vishvas News investigated the viral post and found that a Delhi government advertisement, published in Dainik Jagran on February 29, 2020, was edited and Muslim word was added separately. The edited advertisement has gone viral earlier as well.