Fact Check: Nandi idol from Wai, Maharashtra being shared as that of Varanasi

The viral image of Nandi idol being shared as that from Varanasi in front of Gyanvapi Mosque is from Kashi Vishweshwar Mandir, Wai, Satara. Viral claims are misleading. 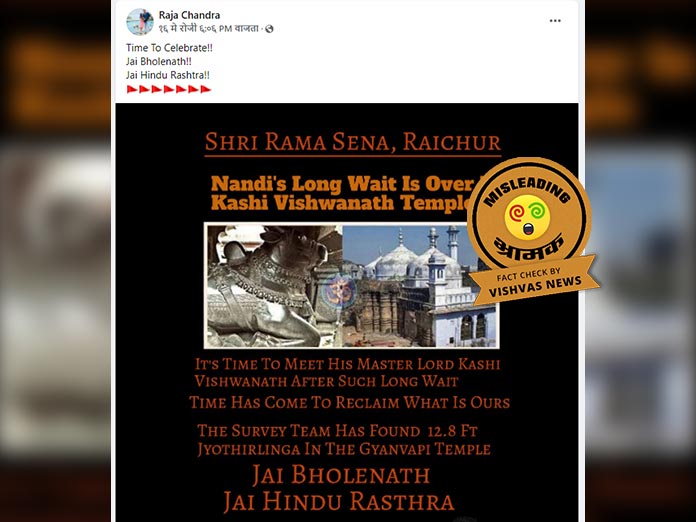 New Delhi (Vishvas News): Amidst the Gyanvapi Masjid row, a collage of two images, in one picture one can see a Nandi idol which is being claimed that it is from Kashi Vishwanath temple in Varanasi and in second image one can see the Gyanvapi mosque.

However, in investigation Vishvas News found this claim to be misleading. The viral image of the Nandi idol, ‘vahana’ of lord Shiva is from Kashi Vishweshwar temple at Wai in Maharashtra’s Satara.

The text on the collage said: Nandi’s long wait is over in Kashi Vishwanath Temple

Vishvas News started its investigation by first cropping the viral picture and separating the image of Nandi idol from collage.

We also found the image of Nandi on tripadvisor website but with a different angle.

In the next step of investigation Vishvas News reached out to Kedar Gokhale, whose family members hold a position as trustees in the Kashi Vishweshwar temple, Wai, Satar. We shared the viral picture with him on WhatsApp and he confirmed that this indeed is a Nandi idol in the premises of the temple in Wai.

It was hence sure that the Nandi idol is not from Varanasi in front of Gyanvapi mosque but from Maharashtra’s Satara district.

In the last step of investigation, Vishvas News did a social background check of the Facebook user who shared the post. We came to know that user Raja Chandra is a resident of Raichur and is followed by 1078 people.

Conclusion: The viral image of Nandi idol being shared as that from Varanasi in front of Gyanvapi Mosque is from Kashi Vishweshwar Mandir, Wai, Satara. Viral claims are misleading.