Fact Check: Naseeruddin Shah Does Not Have A Twitter Handle, Viral Post Is Falsely Attributed to the Actor

Vishvas News investigated and found that Naseeruddin Shah is not on Twitter. The fake tweet is viral in his name. 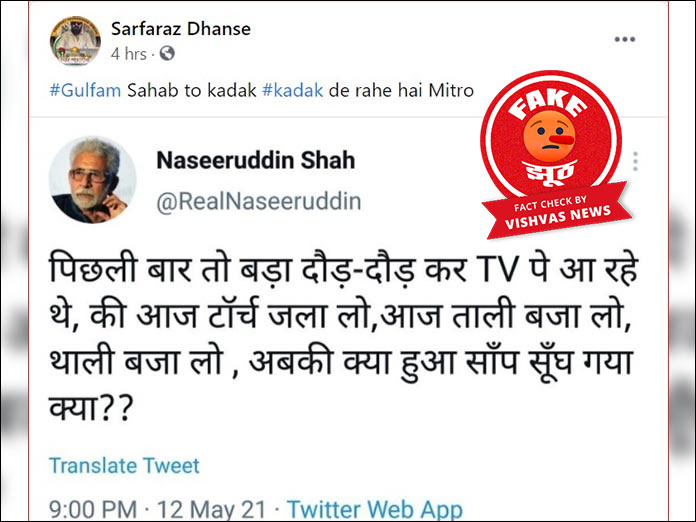 Earlier as well, a fake tweet went viral by his name. It can be checked here.

On May 13, Facebook user Sarfaraz Dhanse uploaded a screenshot of the tweet attributed to Naseeruddin Shah and wrote that Gulfam Sahab is making a lot of friends. The caption reads: #Gulfam Sahab to kadak #kadak de rahe hai Mitro.

In the screenshot, Naseeruddin Shah’s picture was used and the Twitter handle was named as @RealNaseeruddin. The content of the tweet was written: ‘Last time you were coming to TV running, asking people to light the torch, clap, bang the plates, what happened now, the snake sniffed?”

During the investigation, we also found a tweet on this handle, which is going viral. You can see it here.

Vishvas News contacted Smita Srivastava, the lead correspondent of Dainik Jagran covering Bollywood in Mumbai. He told us that Naseeruddin Shah is not on Twitter. This is a fake account.

We scanned the profile of the Facebook user Sarfaraz Dhanse who shared the fake post. We found that the user is based out of Mumbai and has 1327 followers as well as 4879 friends.

Conclusion: Vishvas News investigated and found that Naseeruddin Shah is not on Twitter. The fake tweet is viral in his name.