Fact Check: No, Japan has not decided to dispose microwave ovens

Vishvas News in its investigation found that Japan is not banning microwave ovens, viral claim is fake. 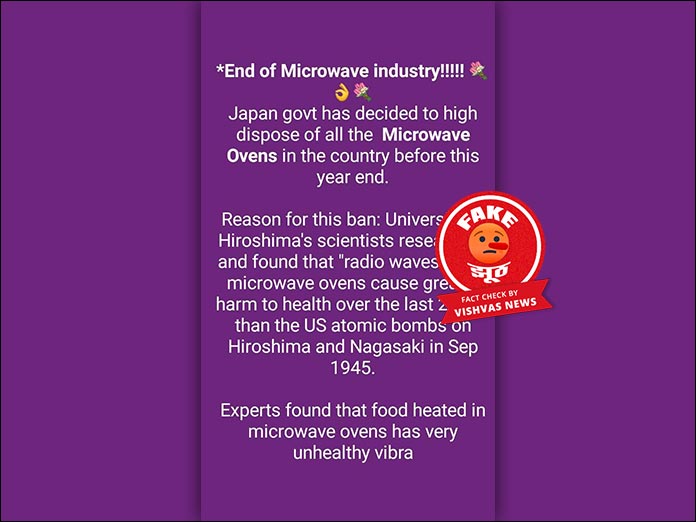 New Delhi (Vishvas News): A post is being widely circulated over social media that claims that microwave ovens will be totally banned in Japan by year end. Vishvas News did a fact check of the post and found that the claims made in the post are fake.

Claim:
Facebook profile, Salahari leaks posted a long message on its profile that claimed that Japan will ban the microwave oven due to various reasons.

Some people are also sharing it over WhatsApp with following claims:

Investigation:
Vishvas News started its investigation with a simple Google search. We saw that no credible news organisation had carried a similar report.

We found this article on a Russian website, which clearly stated at the bottom of the article that

“All texts on this site are grotesque parodies of reality and are not real news .“

Vishvas News also found an article on the website of US Food and Drug administration that said, “Exposure to ionizing radiation can alter atoms and molecules and cause damage to cells in organic matter.”

Vishvas News in the end contacted a, first India-born Asian-origin assemblyman in Japan, Yogendra Puranik, he is also an industry advisor and lecturer at ministries in Japan. He told Vishvas News, “This is a total hoax. Microwaves have evolved a long way. There is a lot of health consciousness in the manufacturing techniques. Meanwhile, Japan has a very good system for disposing the used ovens, rather all household appliances. They are collected from homes and dismantled, then recycled.“

In the end, Vishvas News conducted a fact check on the user that shared the viral claim. Facebook profile Salahari Leaks claims itself to be a journalist.

Conclusion: Vishvas News in its investigation found that Japan is not banning microwave ovens, viral claim is fake.