Fact Check: No, King Henry VIII Didn’t Make This Armour; This Artwork Was Created By A Canadian Sculptor In 1992

No, King Henry VIII Didn’t Make This Armour for his cat. The viral post is fake. This is actually an artwork that was created by a Canadian sculptor in 1992. 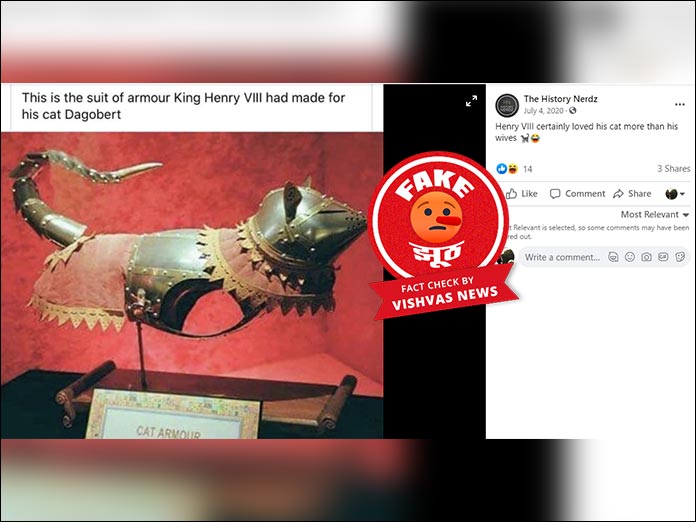 New Delhi (Vishvas News): A photo doing rounds on Facebook claims that it shows an armour that King Henry VIII made for his cat Dagobert. When Vishvas News investigated we found the claim to be false. The image actually shows an artwork created by Jeff De Boer, a Canadian sculptor in 1992.

A post shared on Facebook shows an armour. The text inside the photo reads: “This is the suit of armour King Henry VIII made for his cat Dagobert.”

Vishvas News performed Google Reverse Image Search of the photo and found multiple photos on the web showing the same armour from different angles. The photos can be seen on the website of RIPLEYS in a report headlined: ‘THE VARIOUS FORMS AND TYPES OF ANIMAL ARMOR’.

The description along with the photos reads: Canadian artist Jeff de Boer takes designs of old school animal armor and scales it down and recreates it for cats and rats. If you could get your cat to willing wear it, this armor would be sure to keep it safe from any alley cat attack.

Nowhere was it mentioned that the armour has been created by Henry King VIII.

Who was Henry King VIII?

Henry VIII was the King of England from 1509 until 1547 who presided over the beginnings of the English Renaissance and the English Reformation.

Vishvas News searched about the sculptor Jeff De Boer and found his social media profiles. His Twitter bio reads: “I am best known as the guy that makes armour for cats and mice.”

The sculptor has also received wide coverage on media for his artwork, check here and here.

To further verify, Vishvas News directly contacted Jeff de Boer regarding the viral post. He said: “100% I made this art for a museum back in the early 90s. It’s been a meme for a few years already. Thank you for asking.”

We scanned the page that shared the viral post and found that the Facebook page has 1696 followers.

Conclusion: No, King Henry VIII Didn’t Make This Armour for his cat. The viral post is fake. This is actually an artwork that was created by a Canadian sculptor in 1992.